Manchester: Mandy Fisher didn’t expect to find herself crying in the middle of a suburban Manchester street today. But the mother of two football-mad young boys couldn’t stop tears flowing as she read hundreds of messages stuck over a mural to Marcus Rashford.

“What’s happening here is really, really special,” Fisher says. “This is a moment where good people stand up and say ‘enough is enough’.” 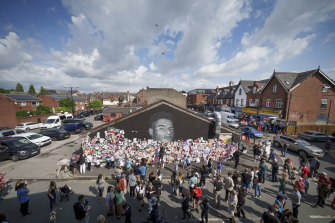 Rashford, a 23-year-old Manchester United striker who has arguably done more to advance race relations in Britain over the past year than any political leader, was one of three black players subjected to a torrent of online racial abuse after missing spot-kicks for England in Sunday’s Euro 2020 final.

Losing to Italy hurt deeply here but the treatment of Rashford, Jadon Sancho, 21, and Bukayo Saka, 19, hurt more. The attacks weren’t confined to the dark corners of the internet, though: the mural to Rashford had also been defaced with racially aggravated language.

Manchester street artist Akse P19 moved in on Tuesday morning to repair his work and was joined by hundreds of residents like Fisher who came to leave messages of support. The wall was covered with colourful tributes by mid-afternoon.

In exposing the worst of Britain, the racists also helped bring out its best. Rashford said he was “overwhelmed”, “thankful” and “lost for words” by the response and on the verge of tears. 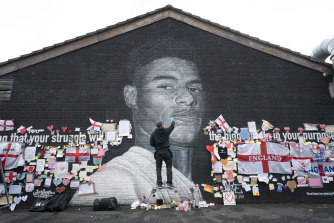 Seventy-five-year-old grandmother Sue Bromley left a handwritten note telling Rashford she would be thrilled if even one of her six grandsons turned out to be like him.

“Do not let this moment detract from all the amazing things you have achieved for young, deprived children,” she wrote. “You have so much to be proud of – including making someone like me interested in football.”

“Why did they have to do it?” asked nine-year-old James Bryce. “Marcus is our hero. I don’t think he deserved this.” 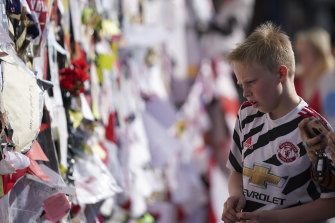 A boy looks at the messages left on the wall in Manchester.Credit:AP

Rashford’s star has been on the rise for years but he exploded to national prominence last year when he forced Prime Minister Boris Johnson to cough up more funding for 1.3 million malnourished children hit-hard by the pandemic. 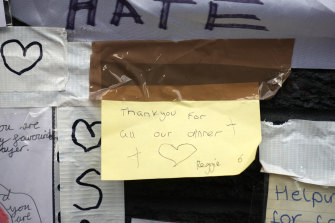 An emotive note penned to Rashford by six-year-old Reggie.Credit:Getty

One message posted on the mural on Tuesday simply read: ”Thank you for all our dinners. Reggie. 6.”

Rashford, who experienced childhood hunger himself, was made a Member of the Order of the British Empire in October for his efforts. His mother Mel Maynard provided the quote for the Manchester mural, which reads: “Take pride in knowing that your struggle will play the biggest role in your purpose.” 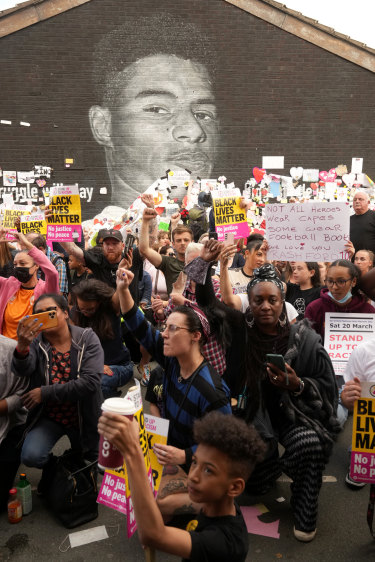 People take the knee at a snap Tuesday evening rally.Credit:Getty

Several hundred people who gathered in front of the Copson Street artwork on Tuesday evening took the knee in solidarity with Rashford, Sancho and Saka, and blamed Britain’s political leaders for failing to address underlying racism in society. 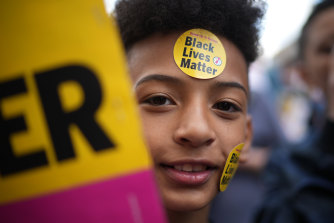 A change.org petition demanding racists be banned from football matches for life is close to securing 1 million signatures – one of the highest ever results.

A parish councillor from Shropshire, west of Birmingham, resigned on Tuesday after several posts appeared on his Facebook page following England’s loss, including one which read: “Black lives f–k up England again.” Police arrested Paul Bradbury, who claims his account was hacked, but released him pending further investigation.

Ed Wellard, who commissioned the Rashford artwork in 2019 as part of the Withington Walls project, said the treatment of the three players after Sunday’s final had “hit hard”.

“There are lots of things going on behind the response we have seen,” he said.

“There is a warmth and empathy to that England team – they are a lovely set of lads and very likeable and accessible, for a change. And against some criticism stood up for themselves and campaigned for equality, diversity and inclusion. 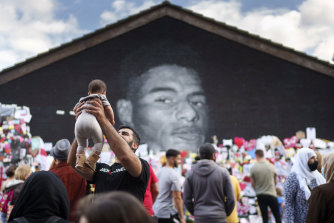 A man holds a child in the air as crowds gather at the Marcus Rashford mural in Manchester.Credit:Getty

“You also cannot underestimate how much people love Marcus Rashford. He’s like a living saint, really, especially in Manchester. And Manchester is a very diverse place.

“What has happened over the past couple of days has struck this community to the core.”