A haunting collection of dolls found nailed and tied to trees on the site of an abandoned village has been discovered by a walker.

The hospital worker, 64, was met with the the dolls’ unblinking stares peering down at her as she headed out for a walk in forest near Hednesford, Cannock Chase, Staffordshire.

She insists the dolls were tied up in ‘some sort of order,’ after finding them at the former site of a First World War military hospital – which later became a mining village before it was abandoned in the 1950s.

The theatre practitioner at Walsall Manor Hospital, who has not given her name, said: said: ‘When I was on my walks I looked a bit further and as I dug through the undergrowth I saw these dolls.

‘They were in some sort of order. Their dresses were all raggedy and they were all tied and nailed to the trees. 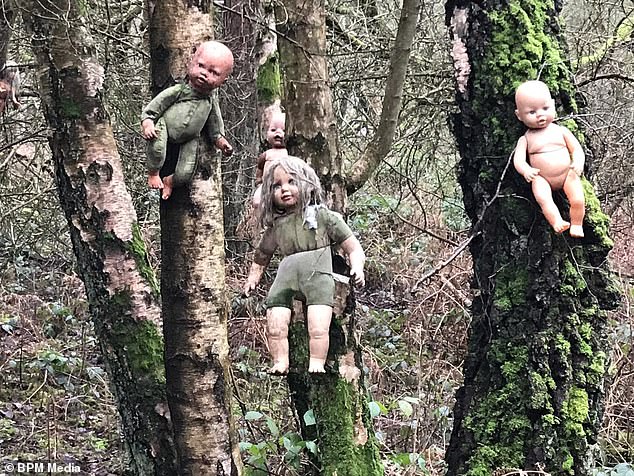 The dolls were found tied and nailed to trees in Hednesford, Staffordshire on January 28. The hospital worker who found them said the dolls were assorted in ‘some sort of order’ 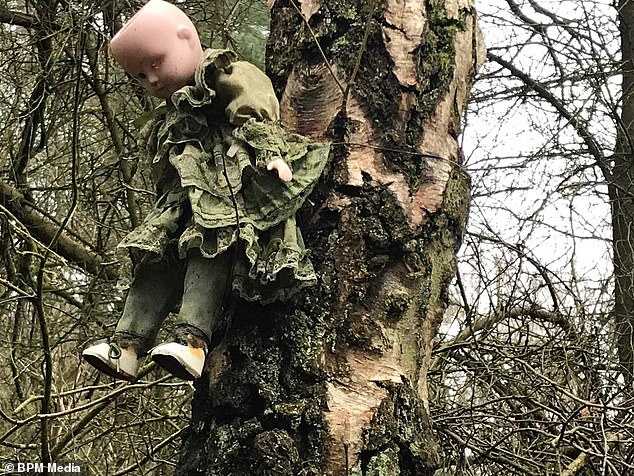 Dressed in raggedy green clothes, the creepy collection was spotted near the former site of a hospital and an abandoned mining village

‘And as I came out of the woods I saw a sign that said that this was the operating theatre for the old Pensions Hospital. It was just a little bit weird considering what I do for my job.

‘I have got a friend who is a spiritual medium and she wants to go and take a look up there to see if she can feel anything.’

Cannock Chase was home to Brindley Heath Military Hospital during the First World War, which was able to treat around 1,000 soldiers at a time.

After the war it was used to treat veterans suffering from PTSD, or shell-shock as it was known at the time, as well as people injured in poison gas attacks in the trenches.

In 1924 the hospital was closed and the land was instead used to house the families of 75 miners who worked for The West Cannock Colliery. 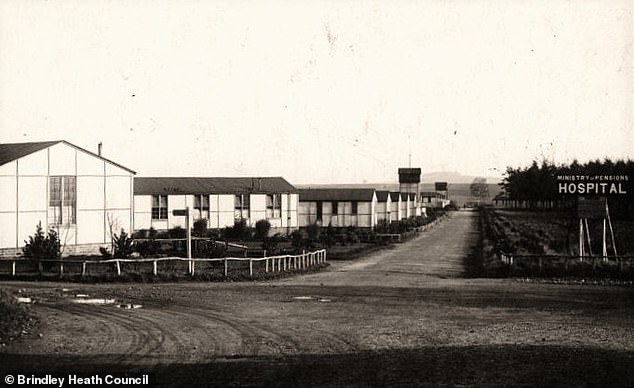 The Ministry of Pensions used Brindley Heath Military Hospital to treat First World War soldiers living with PTSD or poison gas related injuries until 1924. It was converted into a village for miner’s families, before that was abandoned in the 1950s

In 1953 residents of Brindley Village, also referred to as ‘Happy Valley,’ were moved to a purpose-built council estate nearby. The village school remained open until 1959.

Cannock Chase was designed as an Area of Outstanding Natural Beauty shortly afterwards.

Following her discovery last month, the walker later returned to check out the dolls again.

She said: ‘It wasn’t that scary and I stood in amongst the dolls. I was saying my prayers.

‘I talked to the dolls and wished the children who used to live in the mining village eternal rest.’