Dig out the brollies! Heavy rain is set to cause up to eight inches of flooding today – before temperatures hit 63F making Britain as hot as Rome and Nice

A ‘danger to life’ warning has been issued as heavy rain is set to cause flooding across south-west Britain today – but the mercury will then rise to 63F, making the UK as hot as Rome and Nice.

South Wales is due to be worst-affected by the downpour, with up to 8in (20cm) of rain possible, though very mild temperatures are expected in areas of the South.

Parts of the Home Counties to the north of London and Cambridgeshire could be as warm as 16C (61F) today and 17C (63F) tomorrow, on a par with a number of Mediterranean cities.

Up to 6in (15cm) of rain was due to fall in the rest of Wales, Devon and Cornwall between yesterday and the early hours of tomorrow.

The Met Office warned of flooding to homes and businesses, difficult driving conditions and the possibility of communities being ‘cut off’.

Heavy rain in Devon and Cornwall could lead to ‘fast flowing and deep floodwater causing danger to life’, forecasters said. The Met Office’s Becky Mitchell said the rain was due to be significant but unlikely to break last year’s record February rainfall.

Further east, today and tomorrow are due to be mostly cloudy but dry and mild for the time of year. Typical temperatures of 7-8C (45-46F) are expected across much of southern England. 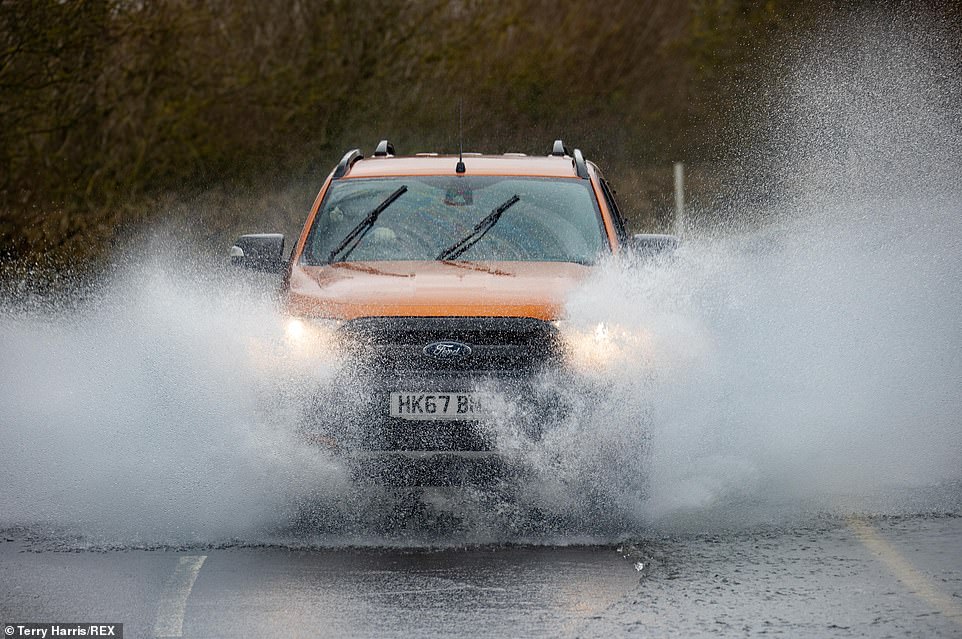 A car causes a splash as it drives through a flooded road in Sutton Gault, Cambridgeshire on Friday afternoon 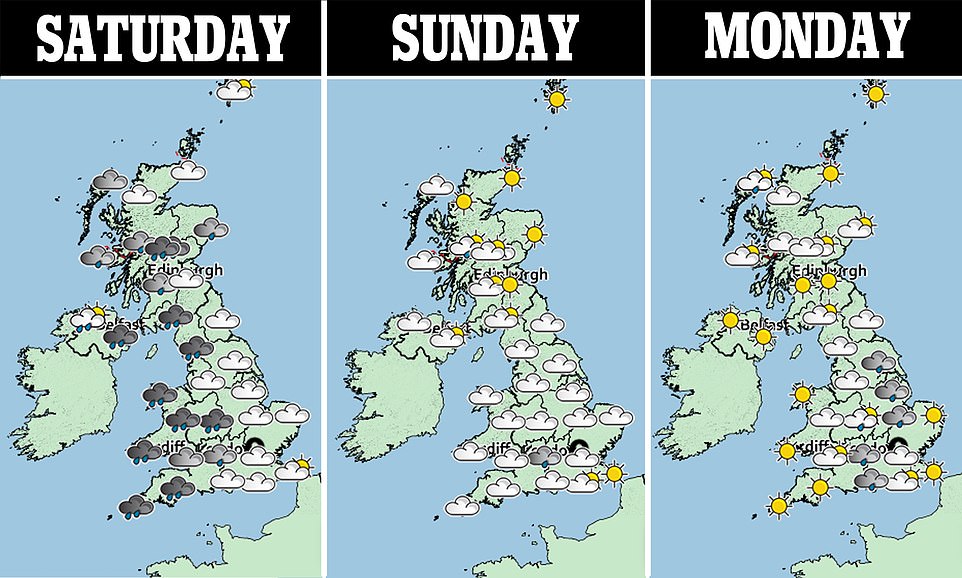 Amid the rain warnings, the Met Office said some areas could expect 25-50mm, but south Wales is likely to see twice the normal rainfall for February over the weekend.

The amber weather warning is in force across parts of south Wales from 8pm on Friday until 6pm on Saturday, with heavy and persistent rain expected to cause some flooding and disruption to transport and utilities.

Yellow weather warnings are also in place across large parts of west and south Wales, parts of west, south-west and central Scotland from Friday until Sunday, parts of Devon and Cornwall from Friday to Saturday and parts of Cumbria on Saturday. 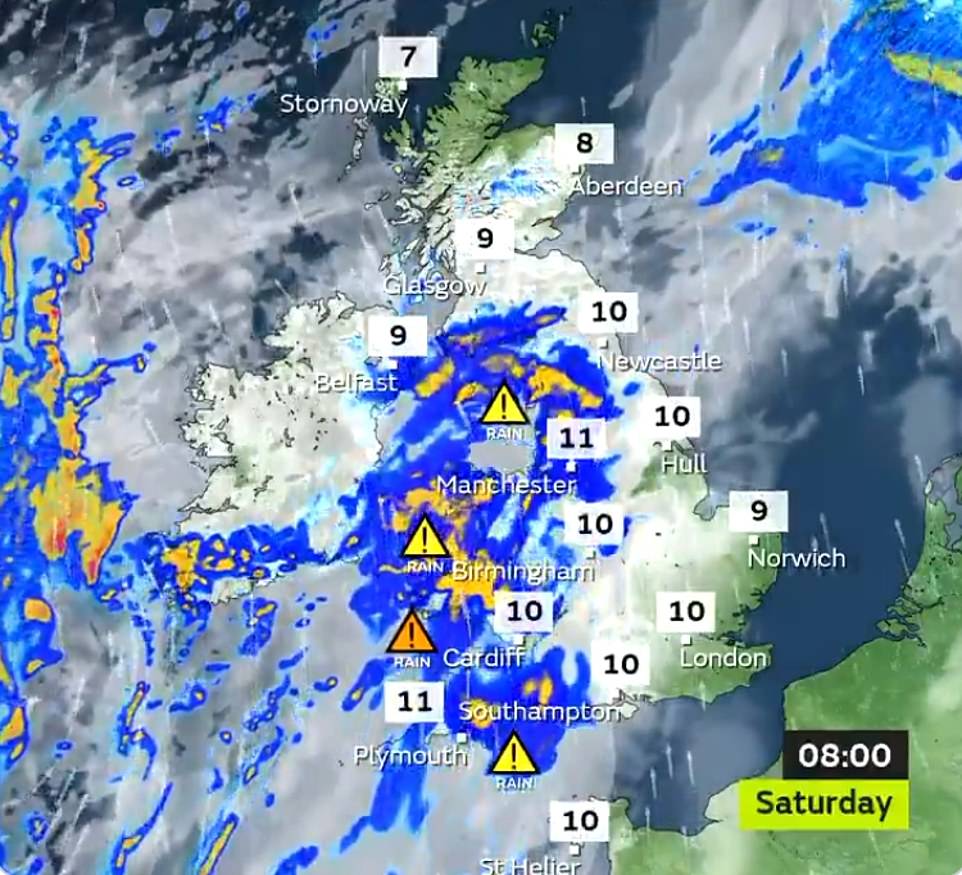 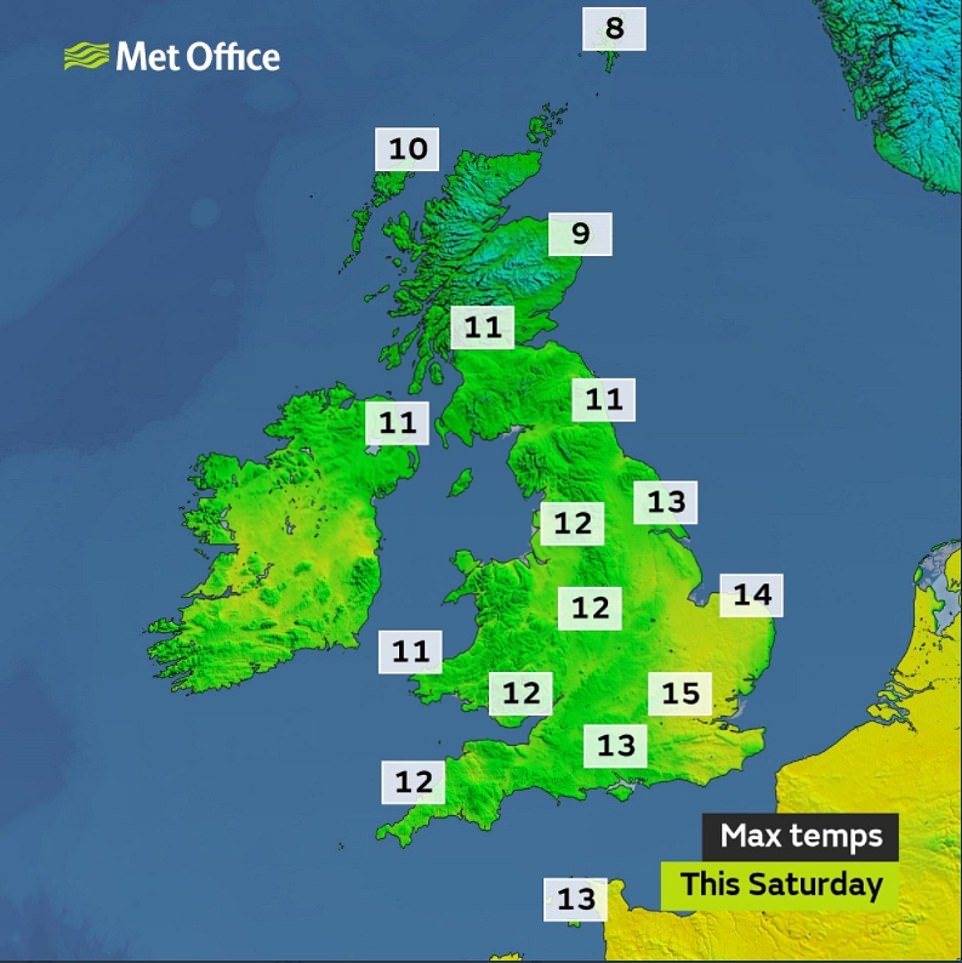 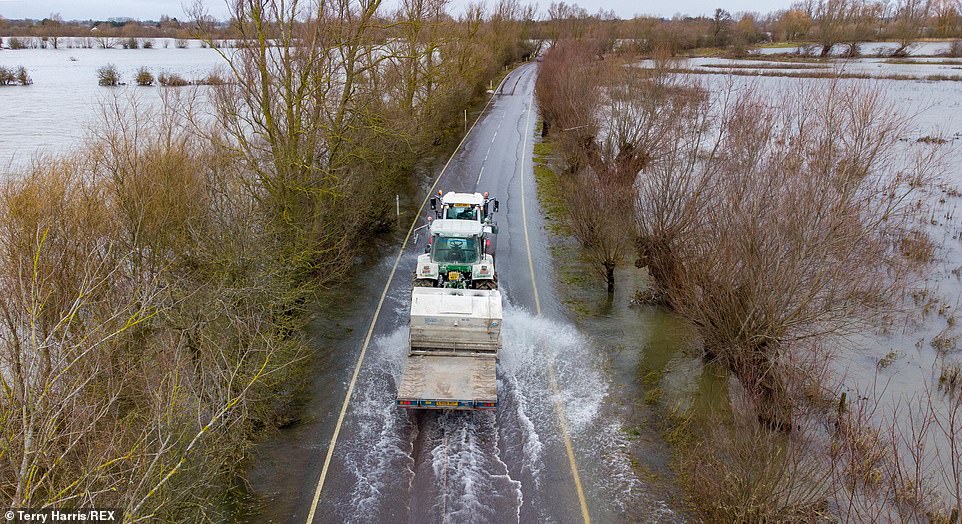 Vehicles cause a splash as they drive through a flooded road in Sutton Gault, Cambridgeshire on Friday afternoon

Met Office senior meteorologist Marco Petagna said that the east of the country will have a much quieter weekend with mild temperatures up to 16C in the south-east, but with light and patchy rain on Sunday.

However, he warned that after a brief break in the rain there was more wet weather due next week.

He added: ‘There’s more rain to come going into next week.

‘There will be some respite Sunday and Monday but going into Tuesday there’s some more rainfall.

‘Again the west and north-west could see further rain developing.’