London: Former UK Prime Minister Theresa May has suggested that Vladimir Putin exploited the West’s increased focus on combating China to launch his invasion of Ukraine.

Speaking to former Prime Minister Julia Gillard at the Global Institute for Women’s Leadership for International Women’s Day, May said that Putin’s war was absolutely horrific but was not a surprise to those in the UK. 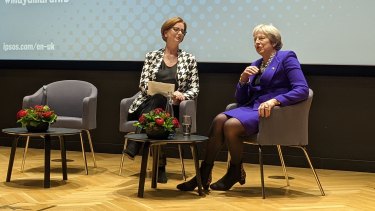 “I think President Putin is an opportunist, a lot of eyes were on China,” May told Gillard at King’s College London on Tuesday morning.

Security was at the forefront of May’s premiership between 2016 and 2019 as Britain struggled to agree on how its security, foreign and trade policies would mesh as it attempted to depart the European Union.

Concerned by China’s increasing aggression, US pressure and Beijing’s treatment of Australia, hawks within the Conservative party began to press the May government to part ways with the China-policies of her predecessor David Cameron who sought a “Golden Era” of British-Sino relations including huge trade and investment, particularly in the City of London. 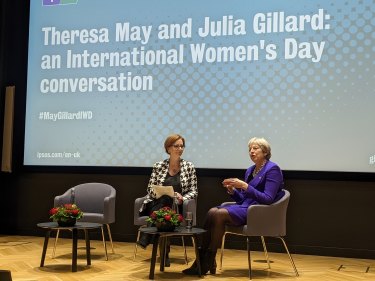 But the nearer threat posed by Russia preoccupied much of May’s time in Number 10, after Putin’s henchmen unleashed a nerve agent in the sleepy Wiltshire city of Salisbury in 2018, in a botched attempt to assassinate the former Russian spy and defector Sergei Skripal.

May said it was for this reason that Putin’s war came as no surprise to the British.

“Here in the UK, we’re perhaps less surprised at anything Vladimir Putin would do given that Russia used a nerve agent on the streets of one of our cities in an attempt to kill two people and sadly, one British citizen lost her life as a result of that,” she said.

“The fact that Russia has no compunction whatsoever in using a chemical weapon on a street like that … I don’t think anybody can be surprised by anything with Putin,” she said.

Putin has hinted that he may use nuclear weapons in an attempt to deter the West from entering the war on Ukraine’s side.

“What we’re dealing with here is not just defending Ukraine but defending the very essence of democracy itself,” May said.

Gillard and May’s discussion about the rise of the political strongman, such as Putin, Brazil’s Jair Bolsonaro and former US President Donald Trump, a trend Gillard dubbed the “era of hyper-masculine populist” politics, prompted May’s assessment of Putin. 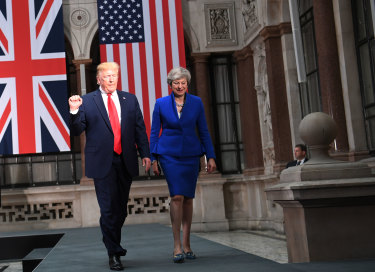 Former US President Donald Trump and former British Prime Minister Theresa May in London in 2019.Credit:Bloomberg

Gillard questioned May on why democracies were “deliberately choosing that image of leadership”.

May said that the challenge posed by the culture of strongmen was that it bred a politics of “absolutism” in which there was no room for compromise and those who disagreed were cast as enemies.

“Social media plays a part in this, which has been part of what’s led to a more aggressive and vitriolic debate in politics today, and these things all reinforce each other,” she said. 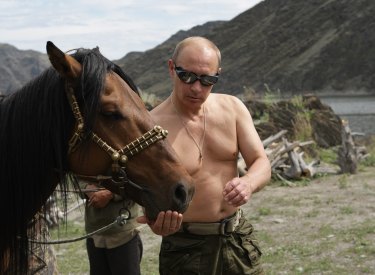 Putin, a former KGB agent, has portrayed a strongman image throughout his time in power. Credit:AP

She said this left no room for people who wanted to strike agreements that could be negotiated and implemented.

“And we’re seeing today, sadly, where strongman can take us,” May warned.

Gillard joked that her institute was conducting research on “men with messy hair,” a reference to Boris Johnson who deposed May on a campaign of “Getting Brexit Done”.

However, Johnson’s own leadership has come under fire over his chaotic management style.