The inauguration was a family affair for Kamala Harris and  husband Doug Emhoff, whose ex-wife Kerstin Emhoff was front and center in family photos at the Capitol! See the snaps and learn more about the family!

One big happy family! Doug Emhoff‘s ex-wife, Kerstin Emhoff was in attendance at the inauguration, where his current wife Kamala Harris was officially sworn in as the first female, Black American and South Asian American Vice President in U.S. history. And, for those who are sniffing around for some sort of scandalous family drama — you’re looking in the wrong place. Kerstin, who appears to have a very amicable co-parenting relationship with her ex, is a proud supporter and close friend of Vice President Harris.

Kerstin — who shares two children with the Second Gentlemen, Cole and Ella Emhoff — shared a number of photos from the family’s Inauguration Day festivities to Instagram. On January 20, Kerstin posed in front of Lincoln Memorial with her son and daughter. “Here we go!” she wrote in the caption of her post, which included a snap of the trio wearing matching black face masks.

In a separate post, Kerstin shared a candid snap of her children as they made their way down the steps of the United States Capitol. “My babies,” she wrote alongside the smiling photo of the brother and sister. A third photo showed Kerstin and Ella standing outside near the Capitol. The proud mom gave a shoutout to her fashionable daughter, who she gushed “made quite a splash” on Inauguration Day — which is a true statement.

Ella, a budding artist and design student, stole the show on Wednesday with her chic style and poised presence. After she made a splash on social media, due in part to her embellished, striped coat, Ella became the unofficial, official breakout fashion star of the inauguration. Additionally, Kerstin tagged a few big-name designers, including Miu Miu and Gucci, in her post with Ella.

Lastly, Kerstin shared a 4-minute video that showed the firework display that took place at night on Inauguration Day. The clip showed the blended family cheering and clapping as they welcomed this wonderful new chapter — after four years of Donald Trump‘s disastrous presidency. 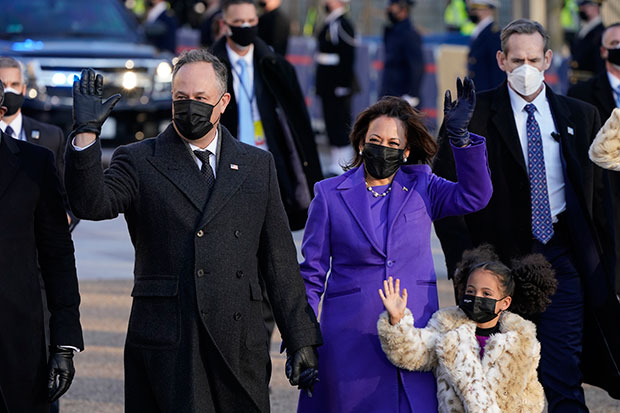 Kerstin and Doug were married for 25 years before their divorce. Doug and Kamala, who met on a blind date in 2013 (a well-documented, heartfelt story told by the VP herself) tied the knot in August 2014. Additionally, Kerstin has publicly supported Kamala and President Joe Biden‘s campaign on social media.

As mentioned, Doug’s ex-wife has a great relationship and strong friendship with Kamala — and the women have spoken very highly of one another on a number of occasions. “Kerstin and I hit it off ourselves and are dear friends,” Harris wrote in Elle in May of 2019. “She and I became a duo of cheerleaders in the bleachers at Ella’s swim meets and basketball games, often to Ella’s embarrassment. We sometimes joke that our modern family is almost a little too functional,” she admitted.

“One of the keys to my relationship with Cole and Ella is their mom,” Harris said in a separate interview with CNN in September. “We are friends. We have a very modern family … The thing about blended families — if everyone approaches it in the way that there’s plenty of love to share, then it works.”

In a profile on herself, Kerstin recalled when she discovered her ex was dating Kamala, who was the attorney general of California at the time. “I just thought, ‘Wow, that’s cool. Don’t mess this up!’” she told Marie Claire in 2020.