Jamie Oliver has made a topical comeback at Boris Johnson after the prime minister missed the celebrity chef’s protest at Downing Street on Friday to visit a honey factory.

A passionate advocate for healthy school meals, food campaigner Oliver organised a peaceful demonstration against what he branded an ‘#EtonMess’ after the government’s U-turn on banning promotional offers on unhealthy food, such as ‘buy one get one free’ deals, and junk food advertising.

The government has decided to postpone the ban for a year due to the cost of living crisis, but Oliver insisted it was being used as an ‘excuse’ for not tackling obesity.

Now, the chef has said he’ll hand deliver some of his own honey to the prime minister on Monday as he urged Mr Johnson to reconsider the government’s stance and ‘just look after the kids’.

Sharing a video next to his own beehives over the weekend, Oliver thanked his supporters and compared the workings of a hive to Parliament. 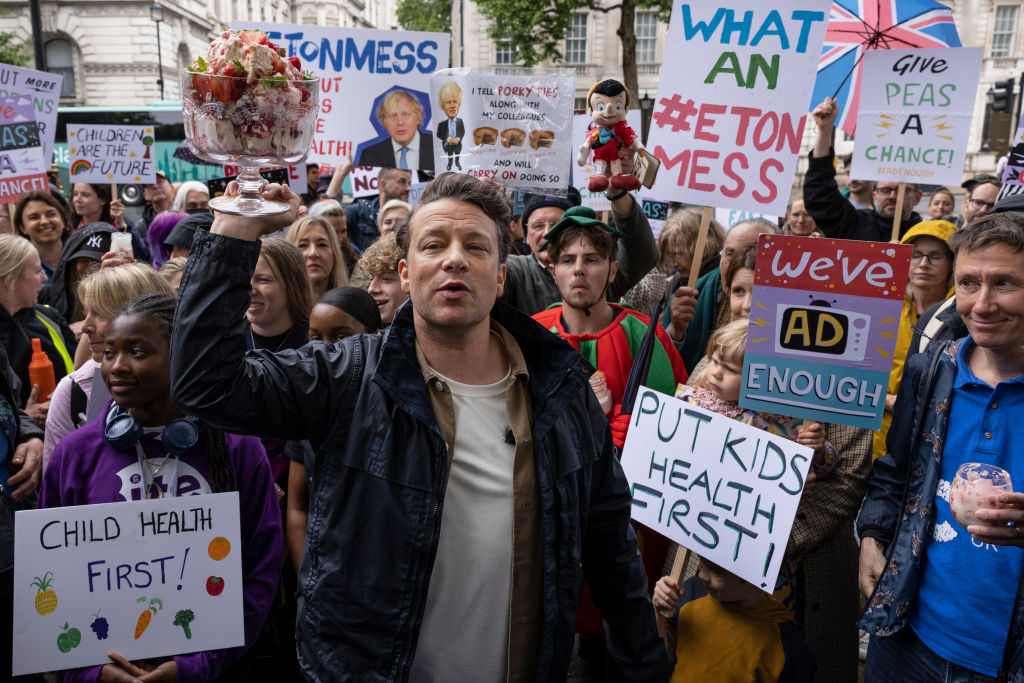 ‘Just want to thank everyone that came to the protests yesterday at No. 10 Downing Street,’ he told the camera. ‘It was amazing, it was absolutely pouring it down with rain and your generosity and spirit and all your banners… it was amazing.

‘Boris couldn’t come ‘cos he was in a honey factory and that’s fair enough, I’m sure they loved it. But it kind of got me thinking about honey and am actually pulling honey right now,’ he explained, panning down to reveal his equipment.

Making his point, he continued: ‘When you’re looking after bees it’s a bit like Parliament really – there’s a hierarchy in there. All those bees have different jobs and if you don’t do all the right jobs at the right time you don’t get health, you don’t get happiness and you don’t get your honey.

‘And the hive is constantly tying to get rid of the boss, the queen, with swarms, which is what’s happening in government right now. You’ve got all this misbehaviour happening. But one thing is true is the most important thing that happens in this hive is looking after the young.’

Going on to explain the roles of various types of bees, including nurse bees, who nurture and feed bee larvae, the TV star claimed that the Government’s decision to delay its tightening of restrictions around unhealthy food showed that looking after kids and ‘feeding them right’ wasn’t a priority.

Oliver said that ‘they think it’s a luxury and not a necessity’, as he pointed out that the ‘graph of ill health’ in Britain was currently ‘really, really bad’ following lockdown.

Speaking on his tour of Hilltop Honey on Friday, as reported by Sky News, Mr Johnson argued that BOGOF offers can help those who are struggling to afford food.

‘At this particular time, if people can save on their food bills with some offers then I think we have just got to be flexible while we continue to tackle obesity,’ he said.