The struggle to get on the property ladder is an issue that has defined a generation.

Millennials – dubbed generation rent – know only too well how hard it can be to buy a home without significant help from parents, or an incredibly well-paid job.

And for many young Black people, the prospect of owning a home remains little more than a pipe-dream as new data reveals the stark inequalities that are shutting them out of the market.

Brand new research from the Runnymede Trust and CLASS, which has been given exclusively to Metro.co.uk, reveals just how much gentrification and the dynamics of race and class impact who can afford to live in London – and who is being left behind.

The Pushed to the Margins report highlights that only 35% of Black and ethnic minority people own their own homes in London, compared to 62% of white British people in London.

It’s a problem that’s getting worse. Of the nearly 300,000 homes built in London in the 2010s, just one third fell within the designation of affordable housing.

The study also found that areas in London with high population churn – where lots of people are moving in and out – subsequently have a loss in ethnic minority residents. This means that Black and Asian people are the first to move out when an area becomes desirable.

This is the real cost of gentrification – forced displacement of people who may have lived in an area for generations.

The devastating impact of gentrification

Dani Nicole is a trainee therapist who has lived in south west London her whole life. She tells us she has been trying to get on the property ladder for a number of years, but she keeps hitting barrier after barrier.

‘I originally started the process with my partner, but when the relationship fell through I began looking alone,’ Dani says.

‘I have substantial savings, but the affordability aspect of getting the mortgage [that you can only borrow 4.5 times your salary] is what blocks me.’

Dani says she’s been told that the only option for her is shared ownership – but she’s skeptical about what that would entail, and notes that despite promises of building up to owning outright, only 2-3% of shared owners staircase to 100% ownership.

‘It feels like without a partner, it’s nigh on impossible to get even a toe on the property ladder,’ says Dani.

‘I don’t think the government are truly addressing the problem. Their strategy seems to be focused on those with a small deposit when there are a large numbers of people, like myself, that need support with salary and income element of securing a mortgage.’

It feels like without a partner, it’s nigh on impossible to get even a toe on the property ladder

Dani says her only other option is to simply move out of London, but her roots are here, as her family brought her up here. London is her home and she feels she shouldn’t be forced out.

‘As a Black woman, I feel like I need to take even more consideration when looking at areas that are less diverse,’ she explains.

‘It’s even more frustrating that I’m unable to own a property where I grew up and London as a whole. And it makes me sad to think that inheriting my parental home may be the only way I can ever own a property.’

In the Pushed to the Margins report, further deep analysis of select London boroughs reveals that in ‘Opportunity Areas’, introduced by Ken Livingston in 2004 and designed to keep housing affordable, gentrification rates are actually 9-13% higher.

The threshold quote of 50% affordable housing is also regularly flouted. Meaning people like Dani are not being given the support they need to take that next step.

CEO of the Runnymede Trust Dr Halima Begum, says that after growing up on Brick Lane in Tower Hamlets, she knows first-hand the benefits gentrification can bring, as well as its heavy blow. While certain developments have improved the area, she says that cannot come at the cost of local communities.

‘Bangladeshi shops and restaurants – the bedrock of the local economy – are now finding it hard to compete,’ says Dr Begum. ‘We need to offer businesses support and control to manage the super growth of the area that is on the doorsteps of the City of London.

‘Regeneration should not come at the expense of local ethnic minority working class communities. As this past year has shown us, they are essential to the functioning of daily life and have given up so much to keep our city running the past year. We must protect them at all costs.’

For young people from minority backgrounds, gentrification is not the only problem. There is also an inaccessible cycle of inherited wealth that is perpetuating racial inequality in the housing market.

A recent report for Bloomberg by the Office for National Statistics, it was discovered that the median accumulation of wealth through home ownership by a Black family over the past decade in the UK is zero.

In contrast, a white British family has amassed around £115,000 through owning property and land over the same period.

Figures from 2020 research by the Resolution Foundation also found that in the UK, people of Black African ethnicity typically hold the lowest wealth (a median figure of £24,000 per family) – less than one eighth of the typical wealth held by a person of white British ethnicity (£197,000 per family).

A lack of inherited financial security deepens and prolonges these racial gaps.

Between 2018-2020, the average person of white British ethnicity inherited a total of £3,068 from friends and family – almost 50% more than an average person from the next highest-inheriting ethnic group, people of Indian ethnicity (£1,958).

The average person of Black Caribbean ethnicity inherited £778, while the those of Black African, Chinese, Bangladeshi or Pakistani ethnicity typically inherited nothing.

This is a cycle that can feel inescapable for many. And it isn’t a concern that is confined to Black people in London. 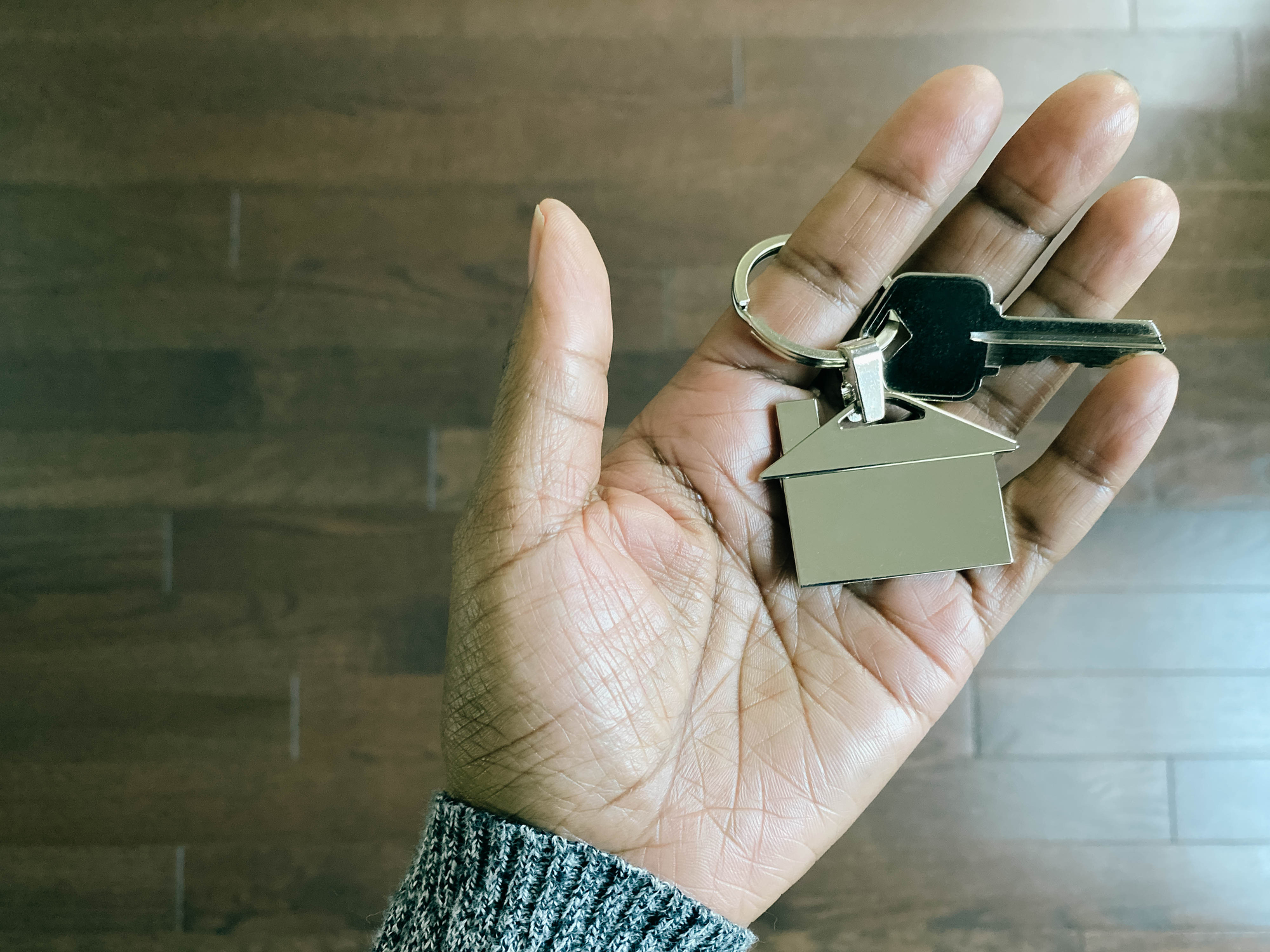 Nae McKay is is a mixed Black woman from west Yorkshire, who currently lives in Bristol. She says buying her own home is the only big life goal she has, but she is becoming increasingly frustrated with the market and how much of it seems to be out of her control.

‘I have no interest in “the ladder” and I resent this goal being turned into a weird game of chance and luck, when all I want to do is focus on creating a life for myself,’ Nae tells Metro.co.uk.

‘Recently, I very nearly bought a flat I didn’t want, in an area I didn’t want, partly through desperation – struggling with the rental market and pets – and partly coming to terms with the fact that if I am to achieve this goal, I’ll probably have to do so with many many caveats and concessions that generations before didn’t have to.’

Nae says that as a mixed woman with white heritage, she has a lot of conflicting feelings about potentially buying in areas that are going through gentrification. She doesn’t want to be a part of that ‘wave’, or take homes away from Black and brown people on lower incomes.

‘Also, having largely grown up in white areas, I don’t want to walk around with imposter syndrome,’ she adds.

‘On the flip side, working class white areas (the only other places I can afford) are, or at least feel, racist as hell! So how could I live there?

‘Even if I “pass” for white, my dad won’t, and I don’t want my local to be festooned with Union Jacks.’

Nae says she thinks it should be illegal for people to buy up numerous properties in one area. It’s the unfairness of the market that really gets to her, the fact that the race to get on the ladder is rigged from the very beginning as there isn’t a level playing field.

She says: ‘Things like cash sales and auctions are clearly geared towards developers and property moguls, which as a first timer is soul destroying, as they make up the majority of your affordable search results.’

What are the options for young Black people?

Property expert and founder of Property Purchaser, Topsy Taiwo says part of his job is to educate and inspire the Black community to try to overcome societal and economic obstacles.

Sobering data about the racial inequalities in the property market provides some understanding as to why many Black people in the UK feel home-ownership is so out of reach, he adds.

‘It is becoming increasingly out of reach as economic crises, such as the one we’ve just had, increase the wealth divide between the “haves” and the “have nots”,’ Topsy tells Metro.co.uk.

‘Black Africans migrated to this country later, which can partially explain low home-ownership rates, however this doesn’t tell the whole story. Racial and class divides have meant Black families have faced more barriers in accessing the highest paying jobs of society, which has in turn limited access to property ownership.’

It’s a multi-faceted problem with wide-spread inequalities and spiraling gentrification at the heart of it. So, is it a hopeless picture for young Black people in the UK?

Author and content creator Stephanie Yeboah says she was desperate to get on the property ladder before turning 30, but since entering this new decade, she says her perspective has shifted.

‘I realised that a lot of those expectations were borne of the pressure I was feeling within my peer group, with it seeming like everyone was starting to buy homes left, right and centre,’ Stephanie tells Metro.co.uk.

‘At this point in my life, I’m not confident that I will be able to save up enough for a deposit on a home – especially as I’m not willing to compromise living outside of Zone 5 in London.’

Stephanie says she’s perfectly happy renting for the time being, and is putting her energies into other personal and professional achievements she wants to tick off.

‘I’m not even sure that I will spend the rest of my life living in England, so a part of me is wary about locking down a 25-year mortgage, only to pack up two years later somewhere else,’ she adds.

Stephanie’s attitude is a refreshing antidote to the relentless pressure that many young people feel. The pressure to tick that property ownership box and claw their way onto the ladder at any cost.

But with property still being the one of the most risk-free and straightforward ways to build long-term wealth, many argue that the focus should be making the market more accessible for everyone. A refusal to make systemic changes to the process of home-buying may further entrench the racial wealth gap that is already so stark in the UK.

‘The majority of millionaires in the UK are heavily invested in real estate as it is an asset that generally appreciates well over time, it can provide passive rental income and can be passed down to future generations,’ explains Topsy.

‘UK property is scarce and the population isn’t, these simple economic principles, coupled with the fact that the UK is still an incredibly attractive country for foreign investment, education and labour, mean UK real estate will continue to be a great asset to leverage to build wealth.’