Niue is a tiny island nation in the South Pacific located between Tonga, Samoa and the Cook Islands with a population of about 1800 people.

After two years of keeping COVID-19 off the island, Niue recorded its first positive case in March.

Last Friday, the Niue government released a statement informing the public there were now 14 active cases of COVID.

“We will move to COVID Alert Code RED. This will take effect immediately,” read the statement from Niue’s acting premier Sauni Tongatule.

If you’re wondering where the proper premier is, we’ve found him.

He’s in Birmingham at the Commonwealth Games with a bucket of hot chips in his hands about to compete in the lawn bowls. 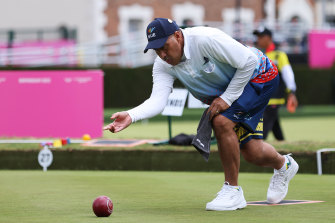 Premier of Niue, Dalton Tagelagi, practises on the bowling greens at Victoria Park at the Commonwealth Games. Credit:Getty

There was a rumour doing the rounds that Niue leader Dalton Tagelagi was set to have a roll against Australia on the perfect Victoria Park greens in the leafy suburb of Royal Leamington Spa.

That has been verified, with Tagelagi and his Niue men’s fours side going down to Australia on Tuesday and then Northern Ireland and Canada a day later. They did not qualify for a quarter-final.

Premier Tagelagi occupies the highest office in the land of Niue, and three weeks ago was rubbing shoulders with Australian prime minister Anthony Albanese in Fiji at the Pacific Islands Forum. 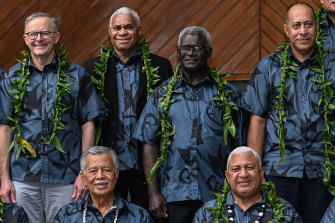 Tagelagi takes off his mask – he’s the only person in sight wearing one – and pulls up a seat at a wooden table just a few metres away from where he is about to do battle against Australia in the first round of the men’s fours event.

“Some of my close mates in bowls here know who I am. I try and hide,” Tagelagi tells the Herald.

“I say to my friend ‘you’re the best man in this sport but I’m the top man in my country in politics’. We have a few jokes like that.”

It’s one of the great untold stories of the Commonwealth Games, which tends to throw up obscure stories involving to athletes from smaller nations. 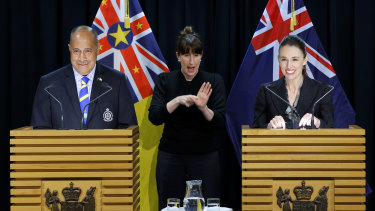 Tagelagi is a softly spoken man and has been in government since 2008. He was sworn in as Niue’s premier in June 2020.

Despite the optics of being in Birmingham competing at a third Commonwealth Games while COVID-19 begins to sweep through Niue, Tagelagi insists there is no issue.

Tagelagi has been supporting his 14-year-old son Tukala, who is another member of Niue’s small lawn bowls squad.

The first thing you notice about Tagelagi on the bowling green, as he coaches his son, is the AirPods in his ears.

They’re in place in case he needs to take – or make – an important call.

“I came here for a two-week break. This is the first time I’ve had a break since I became leader,” Tagelagi says. “I used the chance to bring the young fella here and give him that experience at high-level sport.

“We have a little bit of an issue with our community in terms of an outbreak of about 20 [COVID-19 cases]. They’re managing it well. I still keep an eye on what’s happening back home. It keeps me busy.

“I’m going back to the polls next year. Three weeks ago I was with your prime minister in Fiji. I’ve been away from home for six or seven weeks now. I’m going to Australia in September for meetings in Brisbane. 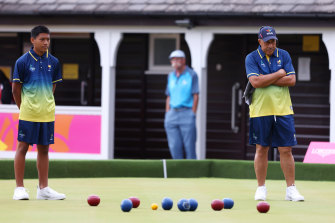 “I actually grew up in Sydney myself.”

A big grin comes over Tagelagi’s face when he reflects on a two-year stint in Sydney in 1984 and 1985.

“I followed Bob Hawke’s leadership at the time before Paul Keating,” Tagelagi says. “I was down in Maroubra. I used to surf and row at the South Maroubra Surf Life Saving Club.

“I’m a Rabbitohs and NSW Blues man. I played league and rugby. That’s why my knees are bad.”

There are myriad scars all over Tagelagi’s arms and legs. More often than not he wears a suit, so no one notices.

“Back home I used to fall off the motorbike and little scooters,” Tagelagi says.

Does he miss Sydney?

“I miss the fish markets [in Pyrmont] that’s for sure,” Tagelagi says. “That’s the best hangover cure on a Sunday. I miss that. I’ve been around but home has always been Niue.” 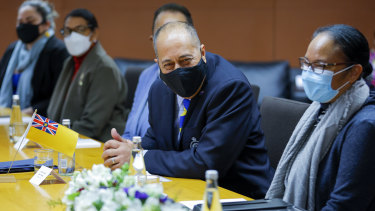 Dalton Tagelagi is a busy man when he’s not on the lawn bowls green. Credit:Getty

Tagelagi admits he could have been more diligent in his preparation for these Games. Juggling lawn bowls commitments and the around-the-clock responsibilities of being the boss of a country is laborious.

Niue does not send athletes to the Olympics, so the Commonwealth Games is the peak for Tagelagi and his teammates.

The country’s bowling greens certainly aren’t flash. There are seven rinks to play on at a small bowling club with about 50 members. 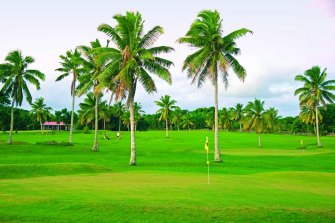 Niue does not have beaches, just a reef that Tagelagi says divers enjoy exploring. The island is vulnerable to big waves and bad weather because there are no other islands other surrounding it.

There’s a nine-hole golf course with about 20 members playing every Saturday morning.

There’s only one flight on and off the island every week.

Did the Aussies know anything about Niue or the influential figure on the other team?

“Not much, other than they’re pretty handy players and really lovely people too,” Healey said.

“I only just found that out that their skipper is the big dog. At the end of the day, you’re out there competing for your country.

“We don’t worry too much about saluting or bowing to anyone.”

Get all the latest news from the Birmingham Commonwealth Games here. We’ll be live blogging the action from 4pm-10am daily.