Family members come together in the wake of trauma, only to dredge up past wounds as they eventually hope to start fresh. It’s a well-worn trope that’s an indie-film staple because it relies on small casts and limited locations. Such is the case with Ben Snyder’s “Allswell,” in which three sisters (related through blood or marriage) come together when a family member is in trouble. Soon, the familiar is mired in unrealized character arcs, clunky lines, and a story that never comes off as well-thought out as it should be.

Sisters Daisy (Elizabeth Rodriguez) and Ida (Liza Colón-Zayas), along with their sister-in-law Serene (Daphne Rubin-Vega) all have their own troubles. After years of struggling with IVF, Daisy hopes her baby dreams will come true after taking in a pregnant girl named Nina (Mackenzie Lansing) she met on Craigslist. Ida, the fixer of the family, puts her friends first at the expense of her relationship with partner Ray (Michael Rispoli). Serene, a former singer, can’t seem to get through to her teenage daughter, Constance (Shyrley Rodriguez) who is trying to break into modeling. And then, Daisy and Ida’s brother (and Serene’s husband) Des (Felix Solis) finally turns up after years of addiction.

The script is credited to Snyder and the three actresses at the center, which could explain why it feels like they’re each making individual short films. Outside their familial connection, each spends most of their screen time separated from each other, only coming together once Desmond’s illness necessitates it. That anthology feeling gives off the sense that everyone is rushing to tell their story as quickly as possible.

Daisy (who the audience meets first) and her relationship with Nina is easily the most fleshed-out story. In Rodriguez’s hands, Daisy is a pusher, foisting green drinks on Nina and asking a million questions. However, she never bothers to get anything in writing with the young mother. Every glimpse of Lansing tells us where the plot will end.

The actors all do great work in roles big and small. Rodriguez and Colón-Zayas have command of their characters. When Serene comes to Nina’s baby shower worried about her own daughter, Daisy clearly wants the day to be hers. It’s selfish, but Rodriguez conveys the anxiousness of a woman who believes her time to celebrate a milestone has finally come. As people-pleaser Ida, Colón-Zayas lacks the meaty plot but she has obvious passion for a character who just wants everyone around her to be happy. 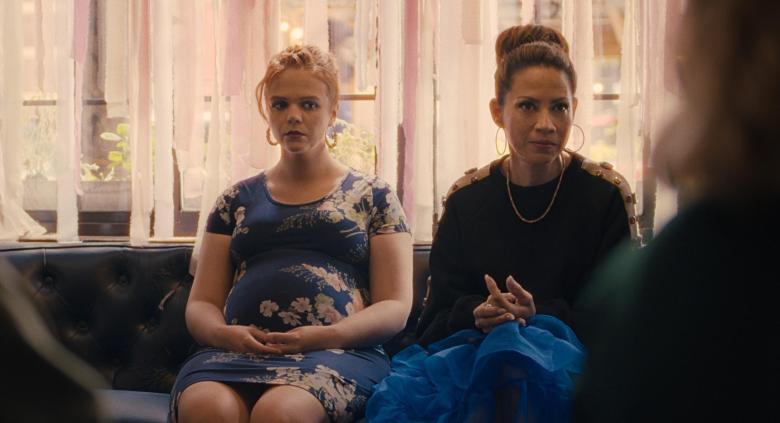 Too often, clunky multiple narratives undermine other performances, as with Daphne Rubin-Vega’s Serene. As a former singer who used her sexuality to get ahead, her daughter appears to be going down a dangerous road where sexual assault looms. Desmond’s arrival should be a moment to navigate her feelings for her former love and the father of her child, but Serene falls into the cliche where only her daughter gives her purpose. When she’s not screaming at Constance, she’s on the phone or rushing into scenes to just ask where her daughter is. Rubin-Vega finally plays a fully formed person toward the end, when she and Des connect.

All the individual pieces that make “Allswell” interesting are smothered in treacle. It feels like a Lifetime series pilot, with the women adhering to one stereotype each. These aren’t characters reconciling with their past; it’s three disparate characters forced to be in one movie. Maybe if this was a television show, these elements would be stronger. The actresses at the center certainly deserve it, and more.

“Allswell” premiered at the 2022 Tribeca Film Festival. It is currently seeking U.S. distribution.