Abortion by pill is used in at least 54% of terminated pregnancies in the United States. The number has grown rapidly since the process became easier to access in 2016 and during the COVID-19 pandemic and is anticipated to rise even higher if Roe v Wade is overturned.

The two pills, mifepristone and misoprostol, are taken about two days apart. In many areas only a telemedicine visit is required to get them from a pharmacy. Cheaper and less invasive than a procedure abortion, when used within the first 10 weeks of gestation they safely terminated 99.6% of pregnancies with very low complication rates.

"Abortion in the last two decades has become less medicalized because of the increased access to these forms of abortion, which are safe, much more private and can be done at home," said Dr. Ana Langer, a reproductive health expert and coordinator of the Women and Health Initiative at Harvard T.H. Chan School of Public Health.

Called "medicinal abortion" or "pill abortion," this method was first authorized by the Food and Drug Administration in 2000 when mifepristone, or RU-486, was approved for use up to the seventh week of pregnancy.

By 2020, the last year for which numbers are available, a full 54% of all abortions were done by pill, according to the Guttmacher Institute, a research group that supports abortion rights.

It's believed the figure is even higher now after the relaxation of federal restrictions in December 2021.

Those restrictions have gone back and forth over the past two years. Prior to 2020, all medication abortions required an in-person appointment.

Then, in July 2020, a federal judge ruled FDA had to allow the drugs to be mailed after a telehealth visit because during the pandemic an in-person requirement was an unreasonable barrier.

That shifted back in January 2021 when the Supreme Court overruled the federal judge and said women must pick up the pills in person from a hospital or medical office.

In April 2021, the rules changed again when the FDA changed the requirements for an in-person visit temporarily, after the publication of data showing telemedicine visit plus mailed pills were safe.

The requirement was permanently removed in December 2021, allowing telemedicine visits and mailed pills.

People choose medication abortion both because it’s more private and feels more emotionally right to them, said Dr. Karen Meckstroth, medical director of the Center for Pregnancy Options at the UCSF.

“People want to take it at home because they want to be in their own space with a friend or loved one," she said.

While the process can be more painful than a procedural or aspiration abortion, for some people that also feels more natural.

ANTI-ABORTION GROUPS COULD WIN A 50-YEAR FIGHT TO END ROE: They aren't stopping there.

"It's more like a miscarriage," said Ushma Upadhyay, a professor of obstetrics and gynecology at the University of California, San Francisco, who studies contraception and abortion care.

A pill abortion is also easier to fit into someone's schedule, which is especially important for people who have little flexibility in their work and childcare needs.

"They like it because they are able to control the timing so they can have it on the weekends so they don’t have to take time off work," she said. 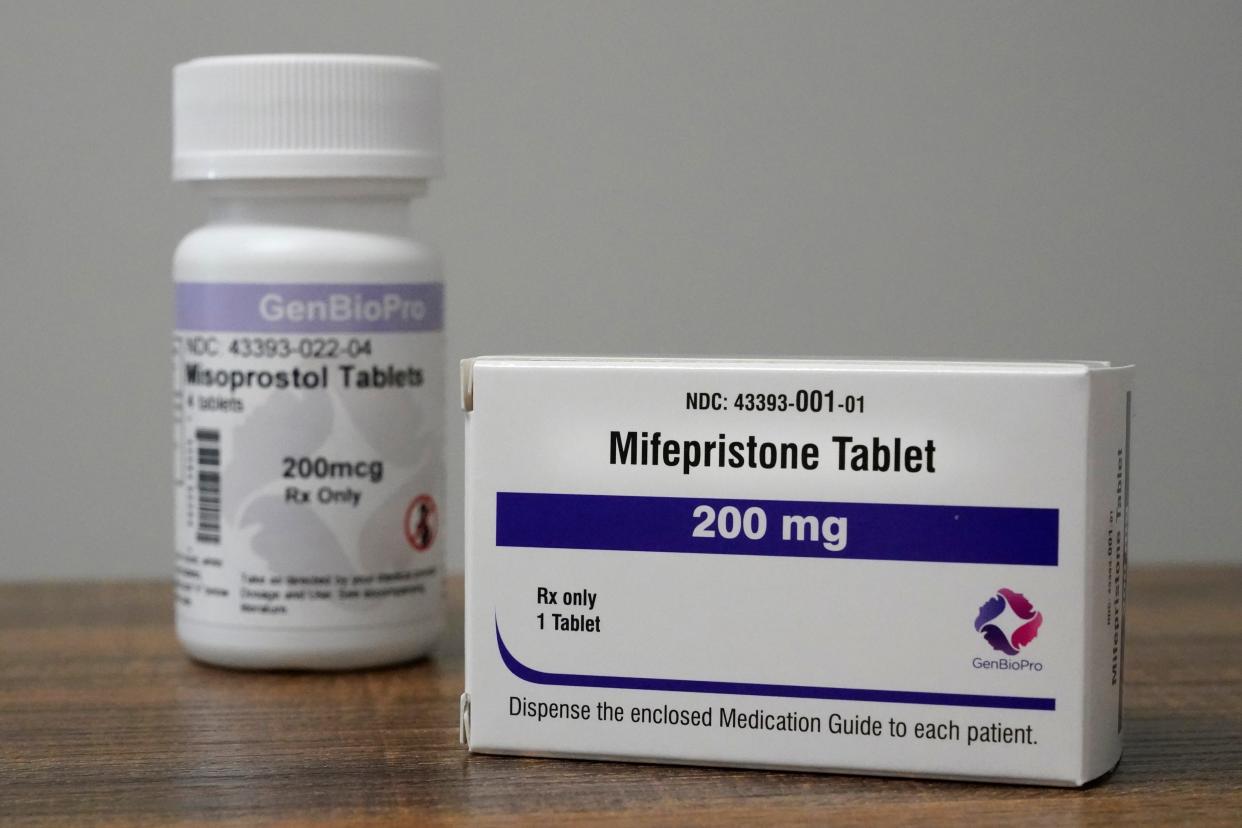 The process begins with a consultation with a medical professional. Once the patient is deemed eligible, the drugs are prescribed at a cost that typically ranges between $250 and $300.

"They can take the first pill with us but they don't have to," said Meckstroth.

The first pill, mifepristone, acts to block the body's ability to absorb progesterone, a hormone that allows the pregnancy to grow.

Between 24 and 48 hours later, the patient takes misoprostol. It generally comes in four tablets which are either put two in each cheek to dissolve or can be inserted in the vagina, depending on the formulation.

"It tastes kind of chalky, kind of bitter," said Meckstroth. "The recommendation is to leave them for 30 minutes and then you swish with water and swallow the remnants."

Within a half-hour to a couple of hours, the misoprostol leads the cervix to dilate and the uterus to begin contracting, which empties the embryo from the uterus.

This can cause cramping, bleeding, chills, nausea and sometimes vomiting. The worst pain and the strongest bleeding usually last no more than one or two hours and the process is completed within 24 hours.

Patients go on to have some bleeding for a little over two weeks, which is normal, she said.

"It's like having an early miscarriage and we recommend people take ibuprofen or Tylenol for the pain," said Meckstroth. In some cases, pain-relieving narcotics might be given as well.

Medicinal abortion around the world

As an abortion method, medicinal abortion has enlarged the number of places providing abortions nationally and globally.

"It's allowed the number of clinics and practitioners offering abortion to expand. No special equipment is needed, it's available by prescription and doctors don't have to keep it in their office," said Upadhyay. "In India, it's available over the counter. In the United Kingdom, it's called Pills by Post. Canada also allows pharmacy access."

Several states already have laws restricting access to it, including requiring patients to make in-person visits to their health care provider. Should Roe v Wade be overturned, such rules are expected to quickly increase

Doctors say this is not medically necessary. In March, a study of more than 3,700 patients at 14 medical centers found medication abortion without ultrasound was as safe and effective as those done with ultrasound.

Jurisdictional issues will be complex and health professionals predict many women will self-manage abortions at home with pills they get through various means. A group called Plan C Pills has created a website with information about the laws in each state.

Already several organizations are arranging telemedicine consultations for women in states where the procedure is legal, including Abortion on Demand, Hey Jane and MyChoix. Internationally, groups like Aid Access provide pills mailed from India after a consultation with a physician in Europe.

"Self-managed abortions this way are very safe and effective, but it opens women up to legal risks," said Upadhyay, though she noted there is no medical test that can show a person had taken mifepristone and misoprostol.

At Harvard, Langer has studied abortion globally and doesn't think rates in the U.S. will decrease long-term although they might temporarily.

"When a woman decides to end a pregnancy, she will find a way to do it," she said. "They can stop a few women but it’s not going to make a difference. This has been documented in many countries."

This article originally appeared on USA TODAY: Abortion by pill: Private, natural and increasingly popular in US