New York: Fallen R&B superstar R. Kelly has been sentenced to 30 years in prison for using his fame to subject young fans — some just children — to systematic sexual abuse.

Through tears and anger, several of Kelly’s accusers told a court, and him, how he had preyed on them and misled his fans. “You made me do things that broke my spirit,” said one unnamed survivor, directly addressing a Kelly who kept his hands folded and his eyes downcast. “Do you remember that?” 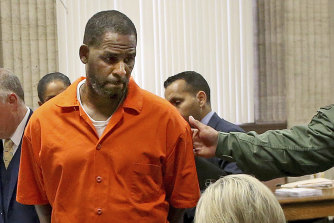 R. Kelly turns to exit during a hearing at the Leighton Criminal Court building, in Chicago, Sept. 17, 2019.Credit:AP

Kelly, 55, didn’t speak at his sentencing, where he also was ordered to pay a $US100,000 fine ($145,000). The Grammy-winning, multi-platinum singer and songwriter was convicted last year of racketeering and sex trafficking at a trial that gave voice to accusers who had previously wondered if their stories were being ignored because they were Black women.

“Although sex was certainly a weapon that you used, this is not a case about sex. It’s a case about violence, cruelty and control,” US District Judge Ann Donnelly told him at his sentencing on Wednesday (New York time).

The sentence caps a slow-motion fall for Kelly, who was adored by legions of fans and sold millions of albums even after allegations about his abuse of young girls began circulating publicly in the 1990s. Widespread outrage over Kelly’s sexual misconduct didn’t come until the #MeToo reckoning, reaching a crescendo after the release of the docuseries Surviving R. Kelly.

The chart-topping artist was one of the most successful of the 1990s and 2000s, known for work including the 1996 hit I Believe I Can Fly and the cult classic Trapped in the Closet.

Australia’s trade talks with the European Union will be fast-tracked, Prime Minister Anthony Albanese says, as he attempts to kick-start negotiations following a break-down in relations with the 27-member bloc last year.

Ahead of a meeting French President Emmanuel Macron in Paris on Thursday, Albanese said EU Commissioner Ursula von der Leyen had agreed to reset talks at meeting at a NATO summit in Madrid. 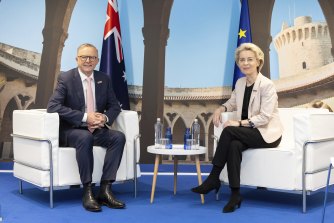 The Australian prime minister met with met formally and informally with leaders about a dozen EU leaders overnight, including Germany, Italy, Greece, Poland, Finland, Sweden, Denmark and Estonia, as he joined NATO members for critical talks over Russia and China.

He discussed the importance of trade diversification with many EU leaders and recommitted to moving forward with the the deal with the $24 trillion GDP bloc.

“It will mean that there’ll be further talks as soon as October but perhaps even sooner,” Albanese said, adding he was now hopeful of seeing “real progress” by March, before the EU elections.

“That means holding multiple meetings, identifying what the issues are that need to be resolved, and then set about resolving them,” Albanese said. “One of the things that is clear to me is that the whole world has noticed that Australia has a different position on climate change. What that does is give Australia a seat at the global table of opportunity, and I intend to seize that opportunity.”

Today’s headlines at a glance

It’s Thursday, June 30. I’m Ashleigh McMillan and I’ll be anchoring our live coverage for the first half of the day.

Here’s what you need to know before we get started.