‘He’s the PM of the whole United Kingdom’: Ministers say Boris Johnson’s visit to Scotland today IS essential as he defies Nicola Sturgeon and pleads for people to shun her independence drive 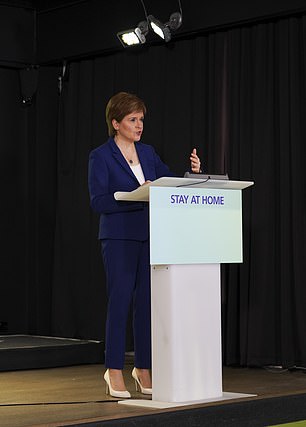 Boris Johnson is defying Nicola Sturgeon to visit Scotland today as he pleads for people to shun her independence drive.

The PM is travelling north of the border despite the First Minister swiping that it is not an ‘essential’ trip under coronavirus rules.

Cabinet Office minister Michael Gove batted away the criticism this morning, saying Mr Johnson wanted to thank frontline workers who were battling the virus. ‘He is the Prime Minister of the whole United Kingdom,’ Mr Gove said.

Mr Johnson is set to make the case for the union amid alarm that the separatist case has been gaining traction, with polls showing Ms Sturgeon is seen as having handled the pandemic much better.

A series of surveys have put backing for breaking up the UK at up to 57 per cent – with the nationalists demanding a fresh referendum as early as this year and threatening to hold a ‘wildcat’ vote if Mr Johnson does not give permission.

Downing Street plans to stress the benefits of being in the UK for Scotland, with Mr Johnson highlighting the support afforded Scots during the Covid-19 crisis.

Officials said the UK Government had delivered more than one million rapid lateral flow test kits to Scotland so far and is funding testing sites across the country – including seven drive-through centres, 27 walk-through sites and 21 mobile testing units, along with the Lighthouse Lab in Glasgow.

Westminster cash has provided 62 per cent of testing kits in Scotland, Number 10 added.

Speaking ahead of his visit to Scotland, the Prime Minister said: ‘The great benefits of co-operation across the whole of the UK have never been clearer than since the beginning of this pandemic.

‘We have pulled together to defeat the virus, providing £8.6 billion to the Scottish Government to support public services whilst also protecting the jobs of more than 930,000 citizens in Scotland. 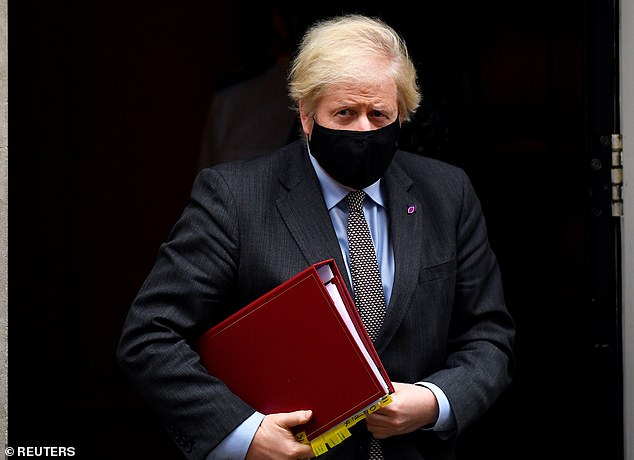 ‘We have a vaccine programme developed in labs in Oxford being administered across the United Kingdom by our armed forces, who are helping to establish 80 new vaccine centres across Scotland.

‘That’s how we are delivering for the people of Scotland so we can ensure the strongest possible recovery from the virus.

‘Mutual co-operation across the UK throughout this pandemic is exactly what the people of Scotland expect and it is what I have been focused on.

‘The people of the UK have stood together during this pandemic: from our doctors and nurses in our hospitals to our shop workers, scientists, lorry drivers and teachers – working together as one truly United Kingdom is the best way to build our Covid recovery.’

In a round of interviews this morning, Mr Gove defended Mr Johnson’s trip to Scotland during lockdown restrictions.

He told Sky News: ‘The Prime Minister has a responsibility and a role to make sure the vaccine roll-out is proceeding appropriately, to thank those on the front line, NHS professionals and those in the British Army who are making sure things work well.

‘It’s also important the Prime Minister hears from those on the front line what is going well and what needs to improve.

‘When the Prime Minister visits other parts of the United Kingdom, other political leaders don’t criticise him, indeed there is a welcome for the Prime Minister and other ministers who are rolling up their sleeves and are getting in touch with those on the ground who are making a difference.’

He insisted all UK nations are ‘stronger together when we work together’, highlighting the vaccine roll-out.

The visit comes as the SNP ramps up calls for a second independence vote – even though the previous one in 2014 was billed by both sides as ‘once in a generation’. 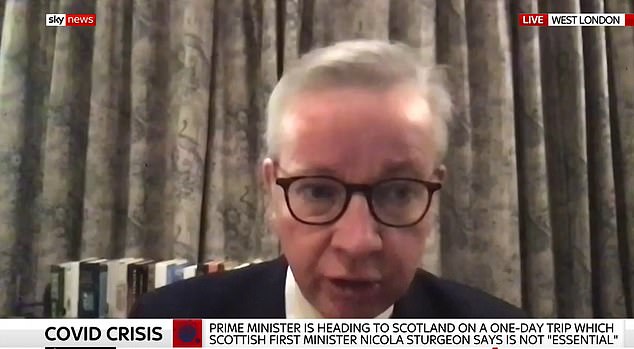 Ms Sturgeon is arguing that should her SNP group win a majority at the Holyrood elections – due to happen in May – it would be grounds for a new border poll.

She has accused the Conservative Party leader of being ‘frightened of democracy’ in his refusal to back another poll on the union, following 2014’s independence defeat.

SNP depute leader Keith Brown said the PM’s trip was evidence that he was in a ‘panic’ about the prospect of another referendum.

The MSP said: ‘Clearly, Boris Johnson is rattled. By branding this campaign trip as ‘essential’, this is clearly a Prime Minister in panic, who knows the Tories are losing the argument on independence.

‘Twenty polls in a row have shown that a majority of voters believe Scotland’s future should be in Scotland’s hands – not Boris Johnson’s.’