Murder! Betrayal! Therapy! This episode of Killing Eve has everything — and everyone, thanks to a nifty new title card gimmick where each scene is framed around a character rather than a location. At first I thought the show might be hinting at something, like, "These are all the most important characters who you will be seeing in future episodes," but then one of them ended up stabbed to death, so who knows.

We start with Villanelle (Jodie Comer), whose first stop after last week's church retreat murder is Eve's (Sandra Oh) hotel room. The role reversal is striking: back in season 1, Villanelle was fascinated by Eve in the way that a cat is fascinated by a mouse (you know, right before it bites the mouse in half). But now Villanelle is running, if not exactly scared, then vulnerable — and Eve, rather than quivering with fear, simply can't be bothered. When she finds Villanelle in her room, she doesn't even ask questions, save one.

"Can you be gone when I get back?" she says, and waltzes out.

Meanwhile, Carolyn (Fiona Shaw) is still hiding out and colluding with Vlad (Laurentieu Possa), and still trying to figure out who's torturing and killing the members of the Twelve. (Prediction: She will not solve this until the Killing Eve writing team has fully exhausted its supply of creative ways for these people to die. This week: Licked to death by goats! Next week: Who knows?!) Clues are starting to pile up — for instance, the killer left some Scottish peat moss at one of the crime scenes — but the big break comes when Vlad tells Carolyn that the most recent assassination attempt failed. This latest guy had his toes severed and stuffed up his nose, but he didn't die (note to self, cutting off someone's toes an inefficient murder technique. Use goats instead.)

Unbeknownst to Carolyn, Eve has a theory about this series of killings: it's Helene (Camille Cottin), torturing her way up the chain in search of whoever runs The Twelve. And a lucky encounter with Helene's latest spurned lover offers another lead, as Eve surmises that Helene only seduced this woman in order to get information about her husband. The husband was living in Cuba. Plot twist: Vlad's severed toe guy was also living in Cuba. All of this is very intriguing… and maybe a little suspicious. (I, for one, do not trust Vlad, and I don't think Carolyn should either; her desperation to find the person who killed her son is clearly clouding her judgment.)

A few more threads in this tangled web: Pam (Anjana Vasan), the creepy undertaker and assassin-in-training, finally snaps and kills her horrible brother. This creates a problem for Helene, who wasn't planning on calling Pam up to the major leagues just yet, and now has to get her ready in a hurry — which means that Konstantin's (Kim Bodnia) new life as a beloved mayor is about to get very complicated.

And where has Villanelle been all this time? In therapy! After being rejected by Eve, she paid a visit to the only other person who ever really understood her: Martin (Adeel Akhtar), the psychopath psychiatrist. Villanelle demands therapy — and, eventually, lunch — as Martin tries to help her understand why she's so unhappy. This is a tricky thing to unravel, because it's already very unusual for a psychopath to be unhappy! Psychopaths, as a general rule, totally love being psychopaths and don't want to change. But Villanelle feels terrible, which Martin points to as a potential positive sign: maybe she's already changed, and still changing. Maybe she's "mid-metamorphosis"! 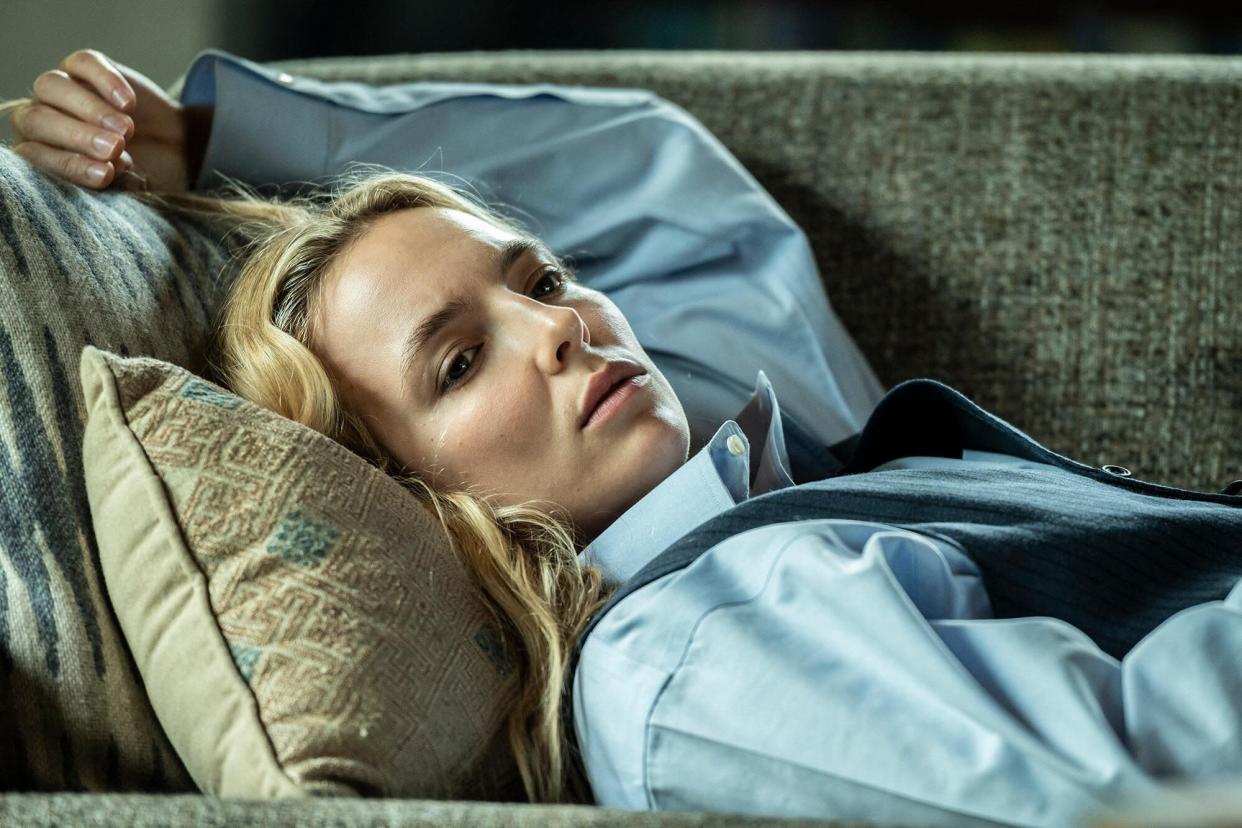 On the other hand, when Martin tries to end their session, Villanelle ties him to a lawn chair and demands that the therapy continue until her problem is fixed. So, maybe she's changing, but some things — like her impeccable fashion sense, and her insistence on getting exactly what she wants exactly when she wants it — remain the same.

And then there's Eve. Just as Villanelle is trying to explain why she finds Eve so irresistible ("She's a rainbow in beige boots": a completely nonsensical metaphor, but a great episode title), Eve shows up to confront her. Amid all the excitement, Villanelle chokes Martin until he passes out and hits his head on a table, but that's just an accident, the assassin operating on instinct. (Martin isn't dead, just concussed and conveniently unconscious for the remainder of the episode.) The question is, are those instincts truly a part of her? Or are they something someone else forced on her like an unwanted gift?

"They trained me to be like this," Villanelle says, "so maybe I can be trained out of it."

Eve doesn't share her optimism. Sitting on the couch with Villanelle, she asks if she's ever heard the fable of the scorpion and the frog.

"They hook up?" Villanelle says, hopefully.

"They both die," Eve says. Because the scorpion can't change its nature — but then again, what has this entire series been if not a refutation of that notion? Maybe it's not so much changing who you are as revealing who you were all along, but Villanelle sees things another way. 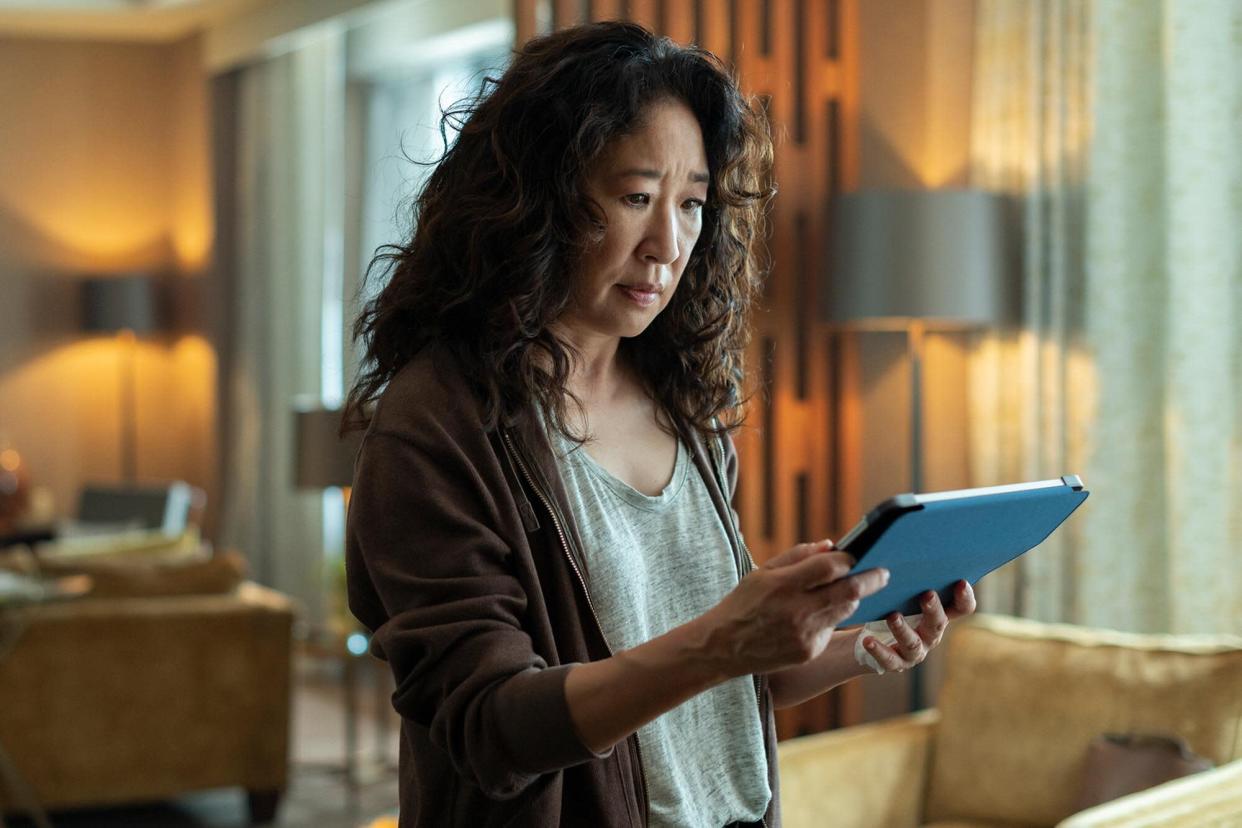 "Maybe you're the scorpion," she says.

She might have a point. Because from offscreen comes the sound of the door being kicked in, and then here comes the cavalry — the police, summoned by Eve — to take Villanelle away, this time as a wanted murderer in the case of the stabbed vicar. And as the credits roll, one can't help noticing that there's a whole lot of metamorphosis going on. There's Eve, coming into her own as a woman with a purpose. There's Pam, on the cusp of a new life as a killer for hire. There's Carolyn, her judgment clouded by grief, chasing a lead that might be too good to be true. And there's Villanelle, behind bars… for now. 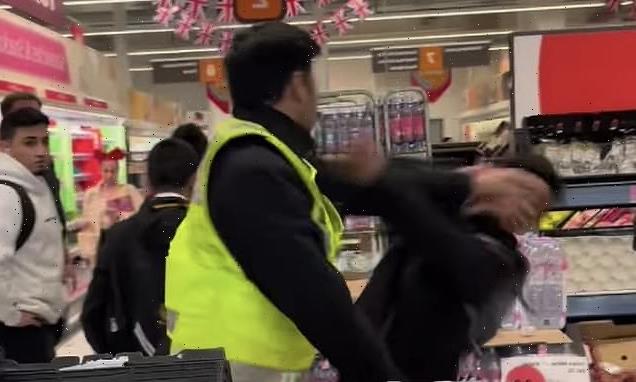