A Meals on Wheels worker was caught on CCTV refusing to give a 70-year-old grandmother a coffee in her own home – and the worker’s manager laughing that she should get ‘F***ing £50’ for it.

Social services chiefs have apologised after the uniformed woman delivering the meal launched into a rant while being captured on security cameras installed at grandmother Jane McTighe’s flat.

It came after confused Mrs McTighe had asked the woman for a coffee – but was told: ‘I’m not supposed to be doing all this.’

The footage shows the worker making a call to her supervisor to complain about Mrs McTighe wanting her to bring her coffee. 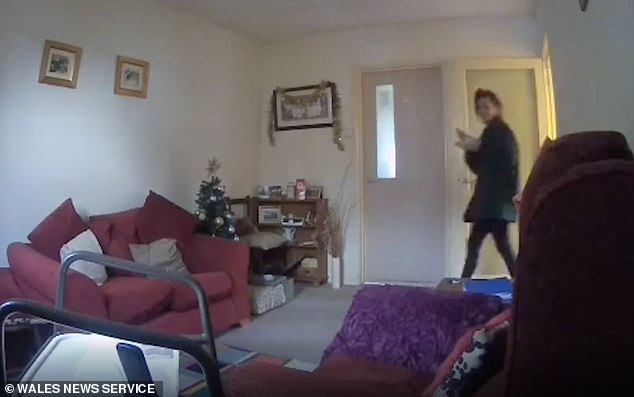 Her supervisor then replies: ‘Well no, not unless she’s giving you f*****g £50 for Christmas.’

Mrs McTighe’s grandson Lewis Jones, 20, of Llanbradach, South Wales, says the cameras were installed after she suffered a string of falls.

He said: ‘My grandmother struggles to understand who is coming in and out of the house, so she didn’t understand that Meals on Wheels can’t or won’t provide a drink – whatever their job description or contract is.

‘There are CCTV stickers all over the front door, and in the flat itself, the camera is not hidden at all.

‘My grandmother has been in and out of hospital quite a lot over the past couple of years.

‘With the carers being reduced, she falls quite often so we needed something in place to make sure she was okay when we can’t get to the flat.’

Mr Jones said his grandmother previously had up to four carers visits a day before the council reduced it to two and then to just a Meals on Wheels visit.

He said: ‘My mother walked in and could see my grandmother was visibly upset.

‘She saw the Meals on Wheels person sat in her van after she had left, so she knew she had just been there.

‘That’s why we checked the cameras, because my grandmother couldn’t explain. 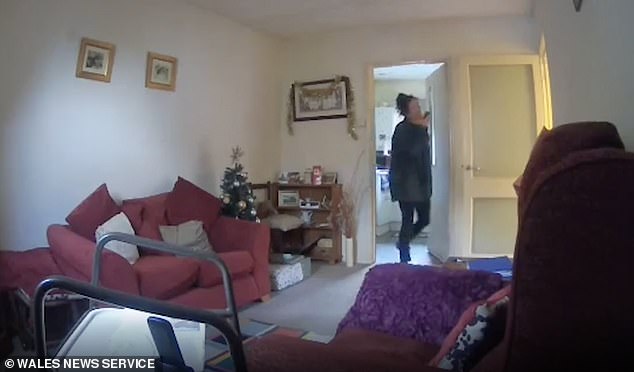 It came after confused Mrs McTighe had asked the woman for a coffee – but was told: ‘I’m not supposed to be doing all this’ 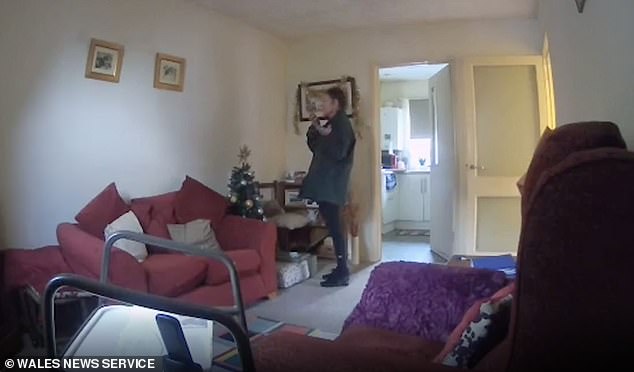 ‘I understand she’s not a carer with Meals on Wheels, but it was the attitude of that person and taking that phone call in my grandmother’s home where she was able to hear it.

‘That left her upset and I think it was important to share what these services are doing to vulnerable people in their own home.

‘It was quite clear she was not concerned about the amount of fluids she was taking on or if she could burn herself, it was quite clearly a case of ‘I’m not getting paid for this – I’m not doing it’.

‘I’m an annoyed grandson, just letting people know what these services are like in my grandmother’s experience.’

Chief executive Christina Harrhy, of the council, said: ‘This behaviour is completely unacceptable and I want to assure our residents that this is an isolated incident and does not reflect the high quality service provision we offer our communities.

‘I wish to offer my sincere apologies to Mrs McTighe and her family for the distress caused. I would also like to offer my personal assurance that this incident will be addressed promptly and in accordance with council policies and procedures.

‘Senior officers will make contact with Mrs McTighe to offer her a personal apology and we will also seek to discuss her needs and offer her appropriate support.’