A limited number of monkeypox vaccines will be available for vulnerable groups as soon as next week, with the federal government to announce it has secured supplies of new third-generation vaccines amid criticism it was too slow to act.

More than 25,000 cases of the virus – which is from the same group as smallpox and is spread via close physical contact – have now been recorded worldwide, predominantly among men who have sex with men. It is very rarely fatal, but in the past week, four deaths were reported in countries outside Africa, where monkeypox is endemic in some parts. 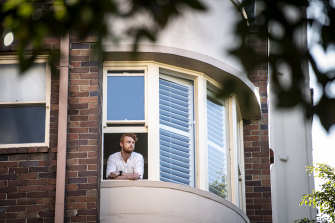 Jack Barlow is a week into a 21-day isolation period inside his Potts Point apartment on the advice of NSW Health.Credit:Wolter Peeters

Jack Barlow, 26, is among 33 people in NSW who have tested positive, 31 of whom caught the virus abroad. He recently returned from the United States and almost certainly contracted monkeypox from a sexual partner in Provincetown, Massachusetts, who later tested positive.

Barlow is now a week into a 21-day isolation period recommended by NSW Health, which he began after developing a swollen lymph node in his groin and being alerted to his friend’s diagnosis. After the telltale rash appeared on the weekend, he was tested and returned a positive result on Tuesday.

He has mild symptoms at this stage, although the rashes are “a bit gross”. “They start off looking like a little pimple, and then they slowly form a dark centre and crust over and fall off,” he says.

On Wednesday, federal Health Minister Mark Butler flagged an imminent announcement about the “hotly contested” supply of vaccines. The minister’s office told the Herald and The Age: “We’ve secured supplies of new third-generation vaccines and will be announcing the details tomorrow.” Monkeypox is also on the agenda for Thursday’s national cabinet meeting.

Sources outside the federal government, who requested anonymity, expected a limited number of jabs would be available to target groups as soon as next week, administered by the states. Butler’s office would not confirm those details. 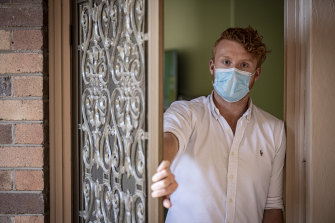 “It’s almost like we’re not even looking overseas to understand what we should be expecting,” says Jack Barlow.Credit:Wolter Peeters

Last month Sydney MP Alex Greenwich wrote to Butler relaying constituents’ concerns about gay and bisexual men returning from holidays in the northern hemisphere summer, where outbreaks have been traced back to LBGTQ parties and festivals.

Barlow is in that category, having spent weeks in the US, which has confirmed about 6500 cases. “When I was over there it kind of opened my eyes,” he said. Some friends he had planned to visit were in quarantine with monkeypox or as close contacts, while others lined up for hours to get vaccinated.

Barlow is a Liberal staffer who used to work for a federal senator and now serves a Sydney councillor. He said the federal government should have moved faster to buy the latest vaccines, even if it was not yet approved by Australian regulators.

“It’s almost like we’re not even looking overseas to understand what we should be expecting,” he said. “For many gay and bisexual men and other men who have sex with men, we are now in that situation where a vaccine that has existed for a while just hasn’t been purchased. I would have launched the same criticism at a Liberal government.”

ATAGI has recommended vaccination be considered for select groups: high-risk contacts of known cases, men who have sex with men with a high number of sexual contacts (particularly those living with HIV, with multiple sexual partners or who attend sex-on-premises venues) and sex workers.

It particularly recommended vaccination for people in these groups travelling abroad to a country experiencing a large outbreak, four to six weeks before their departure.

While Australia has supplies of the ACAM2000 second-generation smallpox vaccine, it is not as effective against monkeypox and not suitable for people who are immunocompromised or HIV-positive, or who may be having sexual contact with people who are.

Professor Gail Matthews, head of infectious diseases at St Vincent’s Hospital and a HIV specialist, said a range of measures, including vaccination and community education, were needed to manage monkeypox in Australia.

“At the moment we are uncertain about how big a problem this will become because while there are not a lot of cases in Australia, when we look overseas we are seeing larger outbreaks,” she said.

Matthews said the HIV/AIDS crisis showed the importance of listening to communities’ needs, and it was important to not stigmatise any particular group as anyone could be infected.