The closure of Docklands’ Central Pier will cost central Melbourne’s economy up to $865 million and 1500 jobs by 2024, an economic analysis has shown.

Respected analysts SGS Economics and Planning, in a report for the City of Melbourne, have found the closure of the pier has had a serious knock-on effect for the whole Docklands precinct which has been hit hard by the pandemic and the recent closure of another major attraction, the Melbourne Star Observation Wheel. 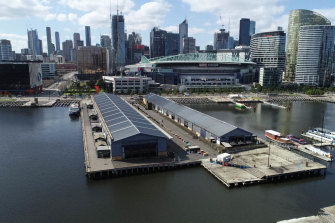 Central Pier, Docklands was forced to close because of structual issues.Credit:Joe Armao

The pier and all of its restaurants, pubs, tourism operators and shops were closed suddenly in August 2019, when engineers found the 100-year-old structure could have collapsed at any time, and have remained off-limits since. Lord mayor Sally Capp is calling on the state government to get moving on a re-build of the attraction.

SGS found the closure was felt most sharply in local accommodation and dining sectors, costing 28 per cent of local jobs in the sector and 18 per cent of Docklands’ retail jobs, with the local economy battling against the loss of up to 1.5 million visitors to the precinct each year as a result of the closure.

The analysts put the economic loss from the first year of the closure at $244 million and $180 million in the second year and $865 million if the pier remains closed until 2024.

Cr Capp said SGS had also found that a reconstruction of the structure and a return of its attractions – at an estimated cost of $550 million – would provide an immediate $250 million boost to the city’s economy and create more than 2000 jobs.

A spokesperson for the state government said it had already acknowledged the need to demolish the pier and rebuild and was “getting on” with the job after allocating an initial $3 million toward the project in the 2021 budget.

Docklands Chamber of Commerce president Daniel Hibberd told The Age that the loss of the pier, which he described as a Melbourne “events showpiece” had an immediate impact on local business conditions.

“There was an enormous amount of cancellations for accommodation for events that were located at the Central Pier.

“Everything from weddings to private parties right through to Melbourne Fashion Week to Spring Carnival to tennis, these guys really celebrated Melbourne and Melbourne events.”

Cr Capp said on Friday that the SGS report underlined the urgency of rebuilding the pier.

“The pier must be reactivated to bring thousands of jobs and millions of visitors back into Docklands. As a former resident, I can attest to how much potential this area has to become a buzzing waterfront hotspot.

“This report proves the economic impact of Central Pier’s closure is severe.

“We strongly urge the Victorian government to get on with it and demolish Central Pier, and establish a temporary feature on the water to attract visitors until major works can occur.”

The government spokesperson said planning for the rebuilding of the pier had already begun.

“The Victorian government is progressing with planning works for the demolition and redevelopment of Central Pier,” she said.

“We know the site is an important part of revitalising the Docklands precinct – and that’s why we’re getting on with it.”