Salman Rushdie never set out to be a martyr to enlightenment values but this is where he finds himself: nursing wounds at a Pennsylvania hospital after the attempt on his life at a literary festival. Reports suggest the Booker-prize winner may lose an eye. So tragic for a man who has helped us see truth.

More than almost any writer in the Anglosphere, Rushdie has shown what courage looks like, and its opposite too. He’s illuminated the hypocrisy, delusion and cravenness of the powerful, of the West’s intellectual and literary elite, even of Joe Biden. 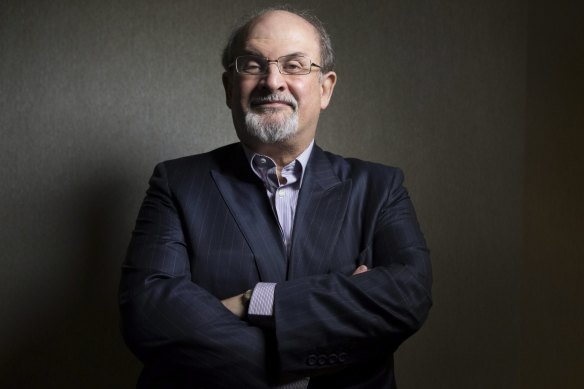 Author Salman Rushdie was attacked at a forum to discuss freedom of expression.Credit:AP

Biden’s moral failure is of a different kind, but it’s especially poignant at this time. In the aftermath of the knife attack on Rushdie, the US president resoundingly endorsed the “universal ideals” Rushdie and his work embody. “Truth. Courage. Resilience. The ability to share ideas without fear,” Biden said. “These are the building blocks of any free and open society.”

These are also the building blocks the Biden administration demolished precisely a year ago in Afghanistan when US forces hastily withdrew, damning all who had answered the West’s post-9/11 call to build civil society institutions. We abandoned brave writers, judges and journalists to the Taliban’s death squads.

Rushdie has not forgotten his fellow writers of conscience. He was assaulted while on stage at a New York literary festival for a discussion about the West being a haven for exiled writers. Ironic plot twists everywhere you look.

So many works have been written since Rushdie penned The Satanic Verses in 1988, so much bloody water under the bridge, it’s a strain to remember precisely what it was about the novel that allegedly “insulted the Prophet Mohammed” leading Iran’s supreme Ayatollah Ruhollah Khomeini to issue a fatwa on the writer.

At the time of the fatwa, plenty of people argued Rushdie had only himself to blame because his prose was so offensive; a perverted logic whereby the virulent response is taken as proof of transgression. I can almost forgive the muddled thinking back then because the Iranian fatwa was only the first sign of the Islamofascist terror to come.

What I can’t forgive is the people who rolled out the same cowardly line once evidence of systematic jihadist intimidation against free thinkers piled up along with the bodies.

A week after the most unspeakable of the atrocities, the 2015 massacre of 12 people at Charlie Hebdo, the satirical French magazine published an edition depicting a regretful Mohammed on the cover. Islam prohibits depictions of the Prophet. Progressive newspapers in the UK and US refused to publish the image or coyly blurred the detail as they might do with naked bodies. Yet, the magazine cover was intrinsically newsworthy, to call it provocative was to cave in to threat.

Even more shameful were the more than 30 acclaimed writers, including Michael Ondaatje and our own Peter Carey, who months after the massacre objected to PEN America, an organisation established to defend literary freedom, honouring Charlie Hebdo. The acclaimed writers condemned the killings, yes. But they also accused the magazine of mocking a “section of the French population that is already marginalised, embattled, and victimised”.

But the satirists at Charlie Hebdo weren’t aiming at “a victimised population,” they were resisting an increasingly dogmatic form of political Islam that’s challenging the ethos of the secular republic. After the slaughter it became all too clear they were also resisting a violent theology seeking to replace the law of the secular republic with the law of the caliphate. A violent theology that as it happens prioritises the victimisation of Muslims considered insufficiently devout. Rushdie, a lapsed Muslim and atheist, said of Carey and the other authors, “I hope nobody ever comes after them”, once more daring the jihadists to come for him.

Having repeatedly put his life on the line, Rushdie was hardly duty-bound to stick his neck out yet again and sign the 2020 Harper’s letter decrying the growing censoriousness – cancel culture, effectively – threatening free thought and speech.

Cancel culture springs from the same pseudo-leftist pathology that gives Islam in general a free pass; the notion certain groups are so “victimised” they ought to be spared rational scrutiny and that rational scrutiny is itself “violence”, an idea only people who don’t routinely confront actual violence can take seriously.

This way of thinking patronises those deemed powerless. It is also inherently contradictory: because a group immune from rational scrutiny is by definition powerful. And it recalls religious fundamentalism, replete with injunctions against forbidden words and ritualised cant.