Roe vs Wade: The Texas mother who won the landmark 1973 case but then became a fierce opponent of abortion rights – and her ‘Roe Baby’ daughter who finally revealed her identity last year

The Supreme Court has voted to strike down Roe v. Wade, the landmark decision that legalized abortion in the United States, a bombshell report revealed on Monday. 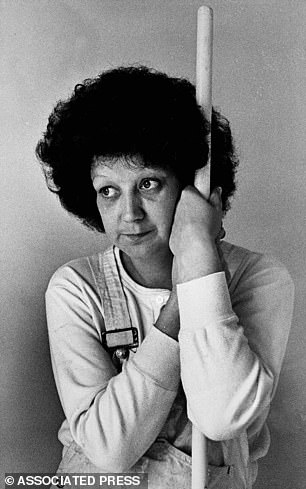 Norma McCorvey, known as ‘Jane Roe’, is pictured in January 1983. A decade earlier she had won a landmark abortion case – but the baby she wished to abort, Shelley Lynn Thornton, was born before the case concluded

The history of the legislation, which has proved controversial since it was made in 1973, dates back half a century.

The case was filed in 1971 by Norma McCorvey, a 22-year-old living in Texas who was unmarried and seeking a termination of her unwanted pregnancy.

She married at the age of 16, but separated shortly after while she was pregnant. She gave custody of her daughter to her mother.

She gave a second child up for adoption, but when she got pregnant a third time she decided to have an abortion.

She said she couldn’t afford to travel to one of the handful of states where it would have been legal.

Because of state legislation preventing abortions unless the mother’s life is at risk, she was unable to undergo the procedure in a safe and legal environment.

So McCorvey sued Henry Wade, the Dallas county district attorney, in 1970. The case went on to the Supreme Court, under the filing Roe vs Wade, to protect McCorvey’s privacy.

Sarah Weddington and  a former classmate, Linda Coffee, brought a class-action lawsuit on behalf of a pregnant woman challenging a state law that largely banned abortions.

She had been among only five women out of a class of 1,600 to graduate with a law degree from the University of Texas in 1967.

The Supreme Court handed down the watershed 7-2 decision that a woman’s right to make her own medical decisions, including the choice to have an abortion, is protected under the 14th Amendment.

In particular, that the Due Process Clause of the the 14th Amendment provides a fundamental ‘right to privacy’ that protects a woman’s liberty to choose whether or not to have an abortion.

The landmark ruling saw abortions decriminalized in 46 states, but under certain specific conditions which individual states could decide on. For example, states could decide whether abortions were allowed only during the first and second trimester but not the third (typically beyond 28 weeks).

Among pro-choice campaigners, the decision was hailed as a victory which would mean fewer women would become seriously – or even fatally – ill from abortions carried out by unqualified or unlicensed practitioners. Moreover, the freedom of choice was considered a significant step in the equality fight for women in the country. Victims of rape or incest would be able to have the pregnancy terminated and not feel coerced into motherhood.

However, pro-lifers contended it was tantamount to murder and that every life, no matter how it was conceived, is precious. Though the decision has never been overturned, anti-abortionists have prompted hundreds of states laws since then narrowing the scope of the ruling. 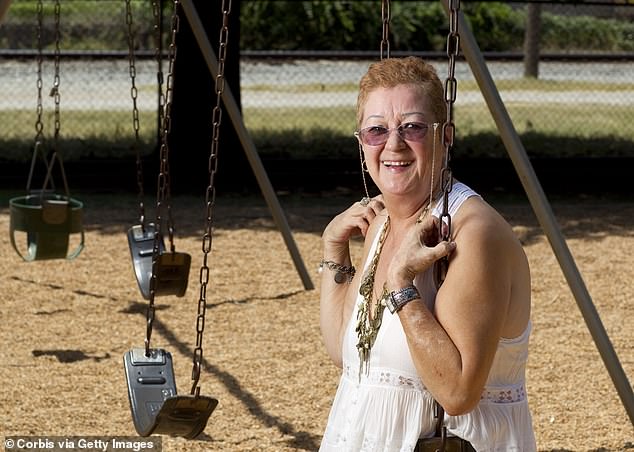 McCorvey is pictured in July 2011. She died in 2017 without ever meeting Shelley in person. The pair spoke on the phone in 1989 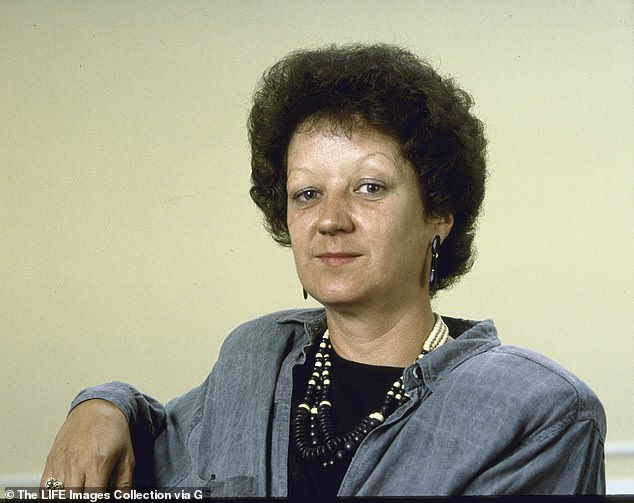 Norma McCorvey aka ‘Jane Roe’ (left) and her attorney Gloria Allred at the Supreme Court in 1989, the year she made her identity known. After winning Roe vs Wade, Norma went on to be a face for women’s rights before switching to be pro-life years later. She admitted before she died that she made the change in exchange for hundreds of thousands of dollars

Following the ruling, McCorvey lived a quiet life until the 1980s when she revealed herself to be Jane Roe. McCorvey became a leading, outspoken pro-abortion voice in American discourse, even working at a women’s clinic where abortions were performed.

However,  she performed an unlikely U-turn in 1995, becoming a born-again Christian and began traveling the country speaking out against the procedure.

In 2003, a she filed a motion to overturn her original 1973 ruling with the U.S. district court in Dallas. The motion moved through the courts until it was ultimately denied by the Supreme Court in 2005.

McCorvey died at an assisted living home in Texas in February 2017, aged 69. She admitted before she died that she made the change in exchange for hundreds of thousands of dollars.

This is my deathbed confession,’ she says. ‘I took their money and they took me out in front of the cameras and told me what to say. That’s what I’d say.’

In the interview, McCorvey refers to herself as ‘the Big Fish’ in the eyes of evangelical leaders who were eager to have her publicly switch sides and take up their cause.

In addressing her activism for the religious right, McCorvey boasts: ‘I’m a good actress.’

Shelley Lynn Thornton, now 51, is the biological daughter of Norma McCorvey and spoke on the record for the first time in 2021. 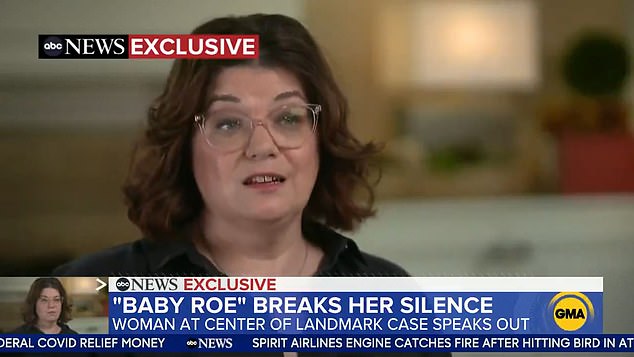 Baby Roe: Shelley Lynn Thornton, a 51-year-old mother of three, has spoken out for the first time on camera. Her biological mother Norma McCorvey was Jane Roe, whose landmark lawsuit Roe vs Wade won women across America the right to have abortions 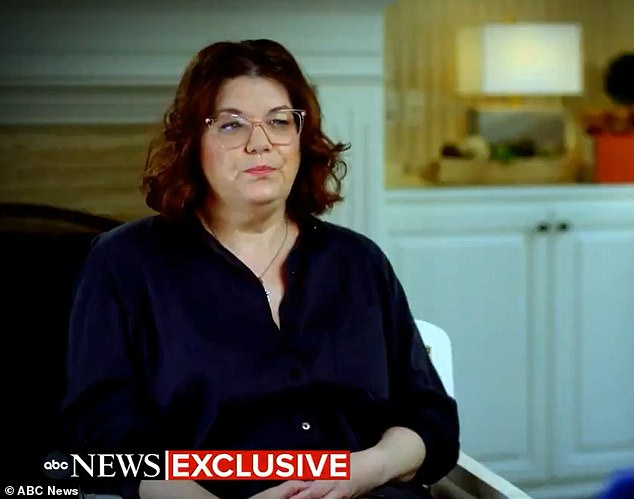 Shelley said she is neither pro-life or pro-choice. ‘I don’t understand why it’s a government concern,’ she said. She has three kids of her own and when she first became pregnant at 20, decided abortion was not ‘part of who’ she was

Shelley appeared on Good Morning America for her first ever TV interview. Her identity was only made public in September by The Atlantic.

‘A lot of people didn’t know I existed,’ she said, adding she fears the world blames her for abortion being legal.

‘My whole thinking is that, “oh God everybody is going to hate me because everyone is going to blame me for abortion being legal,’ she said.

Thornton, who never met her birth mother in person before her death in 2017, told journalist Joshua Prager she had decided to speak out after more than half a century because she wanted to free herself from the ‘secrets and lies.’

‘Secrets and lies are, like, the two worst things in the whole world. I’m keeping a secret, but I hate it,’ she said, in an adapted excerpt from Prager’s new book ‘The Family Roe: An American Story’, published in The Atlantic.

‘I want everyone to understand that this is something I’ve chosen to do.’ 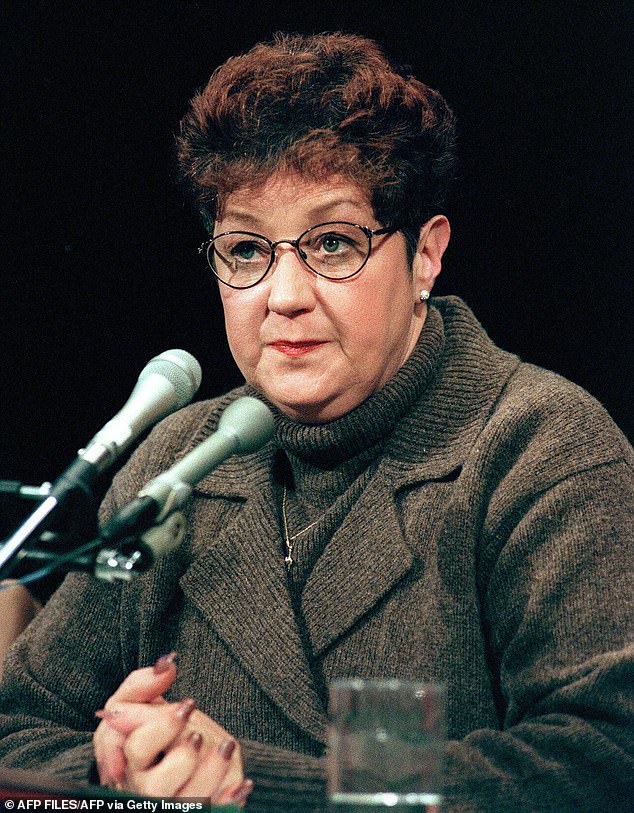 McCorvey in 1998. Shelley Lynn Thornton, 51, has come forward to reveal that she is the youngest daughter of McCorvey – the woman known as Jane Roe

Politico reported Monday night that Justice Samuel Alito, one of six justices appointed by Republican presidents on the nine-member court, wrote a majority draft opinion in February repudiating both Roe and the 1992 Planned Parenthood vs. Casey decision.

‘Roe was egregiously wrong from the start,’ Alito writes in the opinion, which was reportedly circulated among the court members. ‘We hold that Roe and Casey must be overruled,’ he continues in the document, titled ‘Opinion of the Court.’

‘It is time to heed the Constitution and return the issue of abortion to the people’s elected representatives.’

The news sent shock waves throughout Washington D.C. with Democrats vowing to codify the legal right to an abortion into law and Republicans celebrating the news.

Politico noted that this is the first such case in modern history of a Supreme Court draft decision being leaked to the public while the case was still pending.

The draft document is not final until the court formally announces its decision in a case, meaning the ruling could still be changed. The court is expected to issue its final ruling before its term is up in late June or early July.